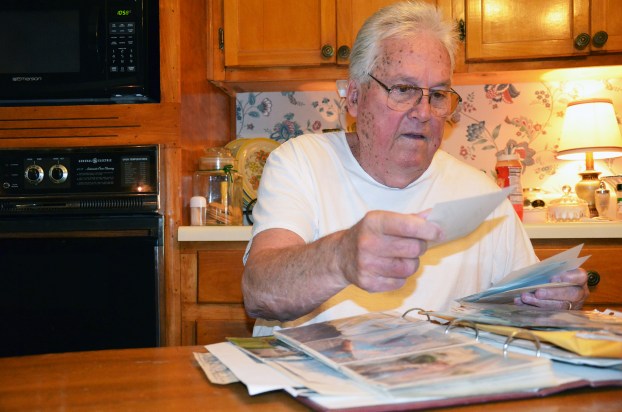 Messenger photo/Jaine Treadwell Lanier Beasley, father of 1999 murder victim J.B. Beasley, looks through a scrapbook with photos of his daughter and the family. A suspect was recently arrested in the case.

The older one gets the faster time seems to fly.

Lanier Beasley is older now, but, for him, time has stood still since the phone rang on that first Sunday in July 1999 telling him his 17-year old daughter, J.B. Beasley, was missing. Then came another ring with the news he had not allowed himself to even think.

J.B. and Tracie Hawlett, a friend and classmate at Northview High School in Dothan, attended a party on that Saturday night and never came home. Their bodies were found the next day in the trunk of J.B.’s black Mazda on a roadway in Ozark. They both had died from gunshots to the head.

In September 1999, an arrest was made but, following a negative DNA match the suspect was released on bond and a grand jury declined to indict. For nearly 20 years, it seemed as if the case had gone cold. The families waited in anguish not knowing who or why. Then, on March 4, 2019, Coley McCraney, a Dothan truck driver and preacher, was identified as a prime suspect. He was arrested March 16 in Daleville and is charged with capital murder and rape. He was denied bond.

This week, Lanier Beasley shrugged slightly at the idea of possible answers to the questions that had haunted the families of the two teens for nearly two decades.

“I don’t know what to believe; maybe they’ve gotten to Fox News” Beasley said, perhaps as a bit of sarcasm.  “Maybe it’s true; maybe it’s not.”

Beasley pushed back the kitchen chair in his home in the rural community of Jack in Coffee County, rested his arms on the table and leaned against them. “They’re going to seek the death penalty. Normally, I would be against capital punishment ….”

His voice trailed, indicating that he might favor the death penalty under these particular circumstances.

“But, there are too many questions and too few answers,” Beasley said, shaking his head. “Just too many. I’m a skeptic. All reports have an element of subjectivity. My grandfather, Elliot Sikes, said you have to analyze information even when it’s said to be scientific. Right now, there are just questions without answers.”

According to information from the chief genetic genealogist with Parabon NanoLabs, McCraney, age 45, was tied to the slayings through DNA uncovered with genetic genealogy testing.

“That’s a starting place but just that,” Beasley said, adding that he is making no judgments until he has the answers to who and why anyone would rape and kill his daughter and kill her friend.

“There is a why and I will not be satisfied until I know the answer,” Beasley said.

But enough of that. Those questions may never be answered. Beasley knows that he may have to live with never knowing. He’s had 20 years of experience of not knowing. But he also has 17 years of memories so a father preferred to talk about the daughter who was a shining light in his life.

J.B. Beasley would be 37 years old now and, perhaps dancing on a Broadway stage or married with children or a teacher or any of the many other things at which she would have excelled.

Beasley smiled as he remembered the good times.

“J.B. liked to eat frog legs at Preston’s in Goshen. And, she loved to dance. She had recently danced at the Basketcase Café in Dothan in ‘Mindscape.’ She was a wonderful dancer. J.B. was determined but not obstinate. She knew what she wanted and I’m sure she would have been great at whatever she chose to do.”

Now, the arrest of McCraney is bringing back that August Sunday in 1999. That time when Lanier Beasley was quoted as saying at times of tragedy and almost unbearable heartbreak, “We see in terms other than what is real. That’s where I am right now.”

Twenty years later, Lanier Beasley is still looking for answers to who and why. Who, he said, will not be enough. He has to know why.

The Trojans fell to Alabama Birmingham 93-89 on Thursday night In front of a record crowd inside Trojan Arena in... read more