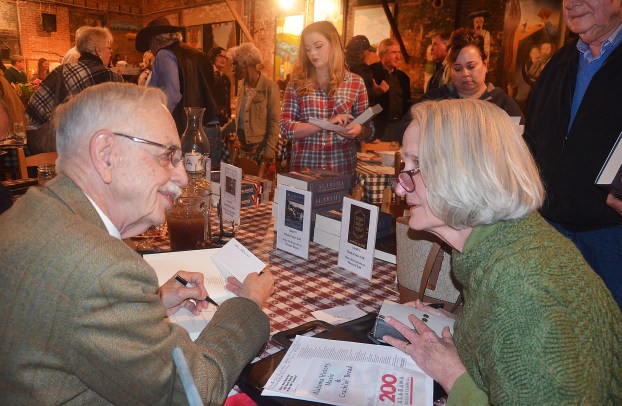 The mere mention of Kathryn Tucker Windham brought spontaneous applause from the audience at the We Piddle Around Theater Saturday night. Alabama’s legendary storyteller appeared several times at the Brundidge theater which is home to the annual Pike Piddlers Storytelling Festival and other storytelling events.

And it was storytelling and roots music that Wayne Flynt, Auburn University history professor and a highly-honored scholar on Southern history, chose to talk about at the Tupper Lightfoot Memorial Library’s Bicentennial event, “Alabama History: Music and Cracklin’ Bread.”

And it all began with the music of the father-daughter duo of Lenny Trawick and Amanda Trawick.

Lenny Trawick said Alabama has a storied history in the world of singer-songwriters. He and his daughter shared the background of some of the state’s most noted singer-songwriters and then performed their songs.

Sue Richards, Brundidge history buff and music lover, said the music alone was worth the $10 admission and a hundred times more.

“I was mesmerized by the blending of the voices of Lenny and Amanda,” Richards said. “I don’t have words to describe what an extraordinary performance it was, beyond extraordinary, and such a sweet combination of father and daughter.”

Richards said hearing the background of the music gave insight into the heart and soul of the songwriters and the songs and set the tone for an equally incredible presentation by Flynt.

He shared his love of roots music that was “rooted” in Grand Ole Opry Saturday night programs and his love of stories fostered by “the greatest storyteller of all,” Kathryn Tucker Windham.

Alabama has a great tradition as storytelling people and also as writers of great American literature, Flynt said.

“From 1933-1977, 12 people from the South were awarded Pulitzer Prizes,” Flynt said.” Five of those were from Alabama and Mississippi, the two poorest states. Poor, but brilliant.”

And those writers have made an impact worldwide. Not the least among them is Harper Lee, author of “To Kill a Mockingbird,” which was voted America’s No. 1 best-loved novel in The Great American Read in 2018.

“There was not one day from April until October that ‘To Kill a Mockingbird’ was not number one,” Flynt said. “The book is sold around the world and the theme is not just racial injustice; it is more than that. It is more universal than race; it’s about what moves you.”

Flynt spoke about Alabama’s past and also its future, which is along the five main corridors where industry and development are clustering, including Interstate 10 and the Huntsville-Decatur area.

He said Highway 231 from Dothan to Montgomery has the potential to become a corridor.

“But sacrifices must be made to become that,” he said.

Richards said she was humbled by someone who carries such a vast knowledge of not only Alabama history, but the history of the entire nation.

“To hear Dr. Flynt talk about how the demographics of our state have changed, about the corridors that will exclude parts of the state and about the unfair tax burden in our state, it really makes you think,” she said. “I don’t know when I’ve had such an enlightening evening. I want to thank the Brundidge library, the city and the historical society for this Alabama Bicentennial presentation.”

Brundidge Mayor Isabell Boyd expressed appreciation to Theresa Trawick, library director, and the staff of the Tupper Lightfoot Memorial Library for the excellent Alabama Bicentennial program and the Brundidge Historical Society for its support of the program.

“This was an excellent program that focused on the role that stories, literature and music play in our community and our state,” Boyd said. “It was a great way to celebrate our bicentennial. The city will continue the celebration with an Alabama Bicentennial traveling exhibition in June.”

The Troy City Schools Board of Education recognized teachers of the year Monday night from each of its three school... read more