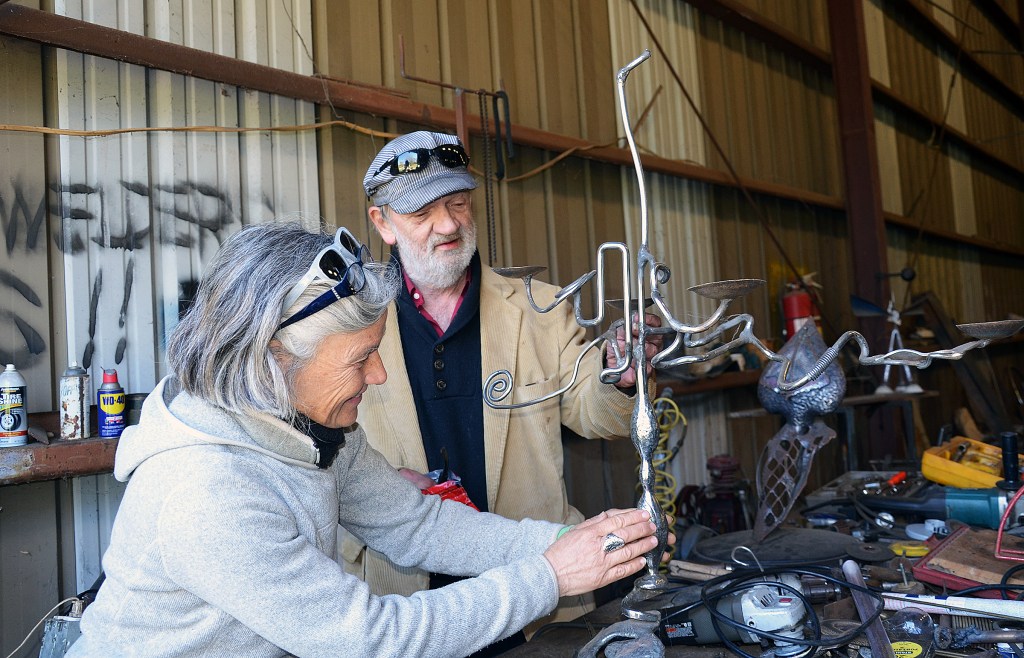 Brundidge is no stranger to famous folks.

Not too long ago, a photographer from National Geographic was in town. You just never show who’s going to show up in the one-stoplight town or why.

And, so it was on Thursday when Steve Cross, Gigi Gaulin and Joy Jinks were in town.
“Who?”

Perhaps those are not household names and may never be.

“A famous artist is one you’ve never heard of,” Cross said, laughing and pulling back his shoulder-length hair and tucking it under his safari hat.

Cross owns and operates a five-generation sawmill near Iron City, Georgia. There, he provides wood for the “ribs” for historically accurate replicas of centuries-old ships. He helped the San Diego Maritime Museum re-create a historically accurate replica of a centuries-old ship. The San Salvador was the 100-foot long flagship of the Portuguese explorer who first sailed to California in 1542.

Cross also cut frames for the rebuilding of the Ernestina-Morrissey at Boothbay Harbor Shipyard in Maine.

Dr. Gigi Gaulin is a veterinarian who has studied veterinary orthopedic manipulation, veterinary homotoxicology and bioresonance therapy. She is a volunteer with Elephant Aid International and is currently involved with establishing an elephant rescue park in Attapulgus, Georgia.

So, what was such a diverse group doing in Brundidge, Alabama?

“We’re here to see my friend, Ronald Godwin,” Cross said, with a smile.
“I’ve known Ronald and his brother, Larry, for a long time. They are friends and I appreciate their talent. Both are outstanding artists and I wanted Gigi and Joy to see their work and know about the contributions they have made to the arts for so many years. I think sometimes that the Godwin brothers are best-kept secrets.”

Godwin, laughingly, said he doesn’t often have such famous company.

“A famous artist is one you’ve never heard of,” Cross said. “And, even an influential artist is a starving artist.”
“I’m both,” Godwin said laughing.

On a more serious note, Cross said he and many others have been concerned about Larry Godwin’s health issues.

Larry Godwin’s metal sculptures can be view all across the country. His life-size Wright Flyer sculptures are in Dayton, Ohio; Daytona Beach, Florida and Montgomery. His work is also at the RSA Park in Montgomery. He has sculptures at Disney World, Hard Rock cafes and in private and public collections for coast to coast.

Ronald also worked on the Wright Brothers projects and his “Strider” actually stopped traffic in New York City. His “Marlin” has survived Florida hurricanes. The Godwin brothers’ artwork has been a part of the rural landscape in and around Pike County for years.

“The Godwin brothers should be recognized for the contributions they have made to art,” Cross said. “I wanted Gigi and Joy to see the work that is still being done and to meet Ronald and we’ll go from there.”

Godwin opened the doors to his make-shift gallery and the response was:
“Welcome, to the candy store!”

The reaction of the Georgians was surprise, wonder and amazement at the talent of the brothers.
“What Ronald is continuing to do with metal is fascinating,” Gaulin said and Jinks agreed the brothers’ work should be recognized.

They visited the metal fabrication shop and Gaulin said she would love to have such a large space.

“But, everything I do now is right here in the doorway,” Godwin said. “I just do small sculptures but I enjoy what I do. I wish Larry could still work. He did such amazing work and he did it for a long time.”

And, due recognition has been too long in coming, Cross said.