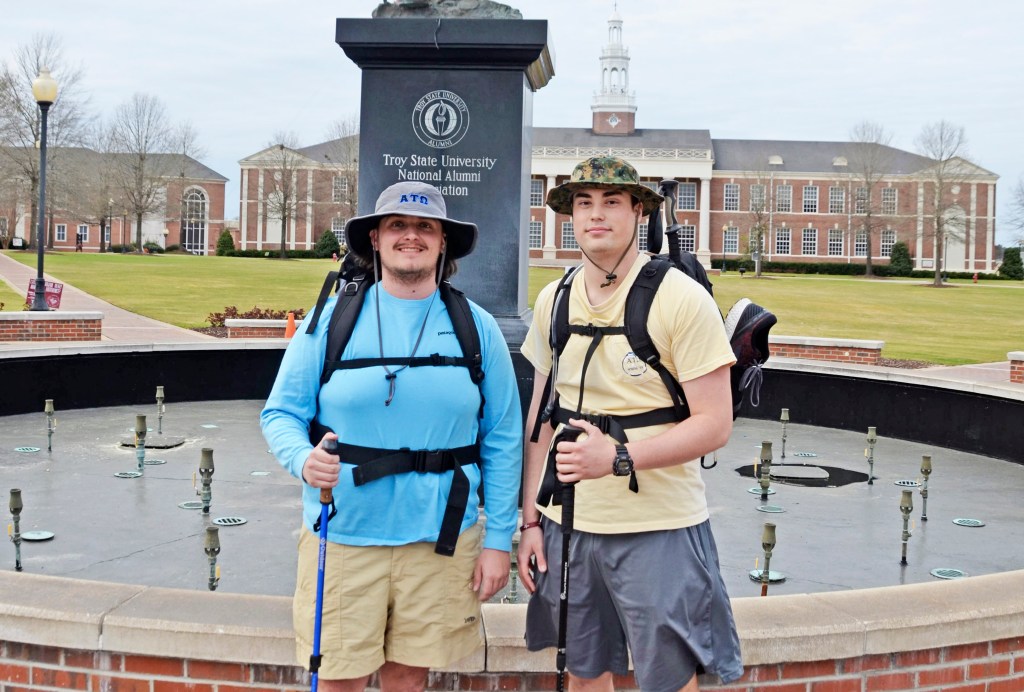 This morning, 36 members of the Alpha Tau Omega (ATO) fraternity at Troy University will embark on a 128-mile trek to Panama City Beach to raise funds to provide hunting and fishing expeditions for wounded warriors.

Four young men from Pike County are included in that rank, and they will be stepping out on the walk for the first time.

“I am really excited to get started on this journey,” said Bradley Paramore. “Being from Troy, I would see these guys preparing for the week by walking up the streets with their packs and thinking they were crazy, but now actually being in ATO and being a part of this, it all just makes sense to me now.”

ATO has participated in the “Walk Hard for Heroes” for the past decade. This trek to the beach is the fraternity’s biggest philanthropy event to raise money for Jeep Sullivan’s Wounded Warrior Outdoor Adventures, a local nonprofit organization.

Troy native Patrick O’Brien said it was that cause that made him want to get involved.

“What Jeep has done has changed lives and ultimately really saved lives,” O’Brien said. “It’s nothing to hurt my feet walking to the beach when they’ve given lives and limbs doing stuff like that.”

Brian Redmon of Goshen said the walk is a chance for him to give back to those people who have served.

“I didn’t choose the military route for myself, so I feel like this is a great way to give back to the people who have served and suffered,” Redmon said. “Some of these people are really broken down, almost to the last straw; Jeep offers them a way to cope.”

Paramore said that he knows it will not be an easy journey down there.

“I know there will be hard parts and I’m scared for the mental road blocks that are going to come, but in the end it will all be worth it,” Paramore said. “We hear about it all throughout the fall and it has finally come and I just can’t wait to feel that accomplishment at the end.”

ATO philanthropy chair Jon Richards said the success of Walk Hard is extremely important to him.

“We came at it all from a different angle this year and that was a lot of pressure on me,” Richards said. “But I am really excited to show the success from it all and reveal how much money we have raised. We are stoked to get this journey started and get out there and start hiking to Panama City Beach.”

The fraternity will reach Pier Park in Panama City Beach on Wednesday afternoon, where the walk will culminate in a welcoming parade. The fraternity brothers will hear from wounded warriors at nights during the walk.

Pike County native and ATO brother Bailey Singleton will also be participating in the walk for the first time. Efforts to reach Singleton were unsuccessful.