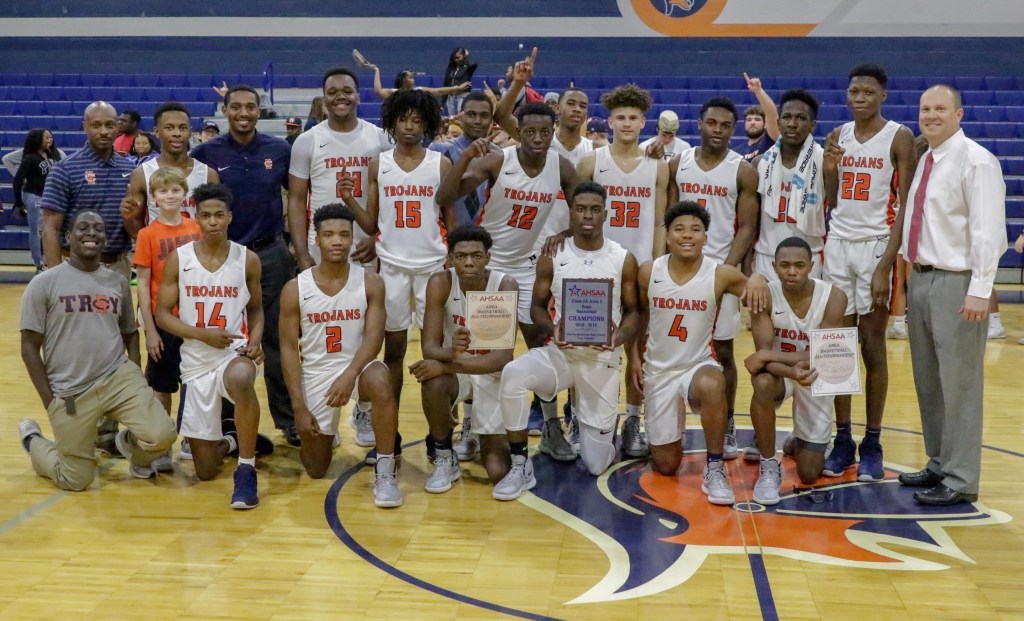 Photo/Dan Smith The Charles Henderson High Trojans defeated Greenville 57-41 Thursday night in Troy to win the Class 5A, Area 3 championship, and will advance to the sub-regional tournament next week also in Troy.

The Charles Henderson High varsity boys overcame a fast start and an early lead by the Greenville Tigers en route to a 57-41 Class 5A, Area 3 championship Thursday night in Troy.

With the victory, CHHS will advance to play Tuesday night at 6 p.m. to host a one-game sub-regional tournament against Tallassee, who lost to Brew Tech Thursday night and finished as the Class 5A, Area 4 runner-up.

CHHS trailed Greenville by as many as eight in the first quarter but got back on track to trail only 11-10 at the end of that period. The Trojans then raced to a 26-17 halftime lead and led 40-29 after three quarters before cruising to the 57-41 victory.

“Early on, I think we were overanxious, and we were excited,” said CHHS Head Coach Doug Branson. “They (Greenville) jumped on us early and took a six or eight-point lead, and once we settled down and started executing our game plan – and that was the key – that was the message in the huddle, to go back to the game plan, go back to the game plan. We started getting the ball inside, and it made those jump shots a little bit easier.

“And give our guys all the credit in the world. They methodically got themselves back in the game by getting defensive stops and rebounding and the offense came along. Once the offense kicked in we were able to establish ourselves.”

Earlier in the season Greenville defeated the Trojans at Greenville, in a physical battle.

“It’s our first year with this program for these young men, and for them to win an area championship and to buy into what we want them to do, they faced these challenges,” said Coach Branson. “Greenville jumped out on us tonight but our guys never flinched or backed down. They continued the game plan and stayed focused and did what they needed to do to be successful. Over at Greenville, they were tougher than we were the last time we faced them, but tonight our guys did not back down. It was just an overall very good win.”

Thursday’s victory sends the Trojans, 19-9 on the year and ranked No. 10 in the state in Class 5A, to the Sub-regional tournament Tuesday at 6 p.m., against Tallassee.