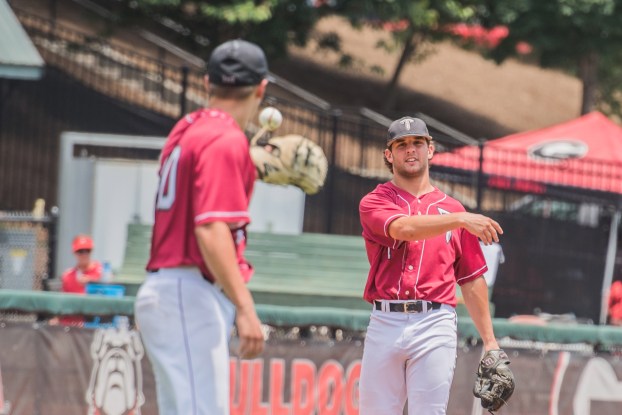 Messenger Photo/Jonah enfinger Troy infielder Drew Frederic warms up with a teammate prior to the start of a tournament game in Athens, Georgia last season.

Frederic adds the award to a list of preseason accolades that includes Collegiate Baseball All-America and All-Sun Belt honors following a stellar 2018 campaign. He led the conference and ranked 20th nationally with 28 stolen bases while batting at a .331 clip with 20 doubles – 10th-most in school history – and seven homers.

The Niceville, Fla., native was a key component in Troy’s impressive run to the NCAA Athens Regional where he was named to the all-tournament team after hitting a homer and a double in each of Troy’s final two games against No. 8 Georgia and No. 18 Duke.

Other Trojans mentioned in the preview included Levi Thomas (2019) and Manning Early (2020) who were listed among the top MLB Draft prospects in the league. Meanwhile, Logan Cerny, Bay Witcher and Taylor Pridgen were listed in the top 15 impact freshman for the conference.

Frederic is set to lead the young and talented baseball squad into a new season as the Trojans kick off their 2019 schedule with four games against Central Michigan at Riddle-Pace Field the weekend of February 15.

The Troy Trojans softball team is gearing up for the start of the 2019 season. Late last week they learned... read more