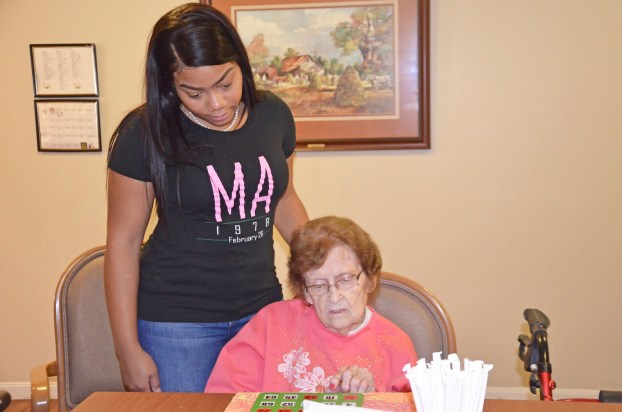 The young women participated in a Day of Service at Nobel Manor in Troy on Monday and spent much of the afternoon with a group of residents enjoying the company of one another and playing Banana Bingo. The residents couldn’t decide which they like better the Bingo or the bananas.

However, they agreed the visit was the best of all, said Catherine Jordan, AKA assistant graduate advisor.

“The members of Alpha Kappa Alpha at Troy University enjoy the fellowship of visits like this and the residents at Noble Manor are among their favorites,” Jordan said. “Visiting Noble Manor was a wonderful Day of Service.”

Kaylor White, Mu Alpha chapter president, said a mission of the sorority is to help alleviate problems concerning women and practicing good nutrition is one of its tenets.

“Banana Bingo is a way for us to have fun with the residents and, at the same time, promote good nutrition,” White said.

Alpha Kappa Alpha Sorority was founded more than a century ago. The Troy University chapter was organized in February 1978.

Smith said the Alpha Mu’s mission is to cultivate and encourage high scholastic and ethical standards and to promote unity and friendship among college women.

The sorority encourages its members to maintain a progressive interest in college.

“We also target women’s health, financial literacy and the arts,” she said.

Jordan said the local AKA has the same mission and encourages and supports the Troy University chapter in its goal to be of “Service to All Mankind.”

“The AKA is active in the Troy community and one of our projects is to revitalize local playgrounds,” she said. “Our most recent revitalization playground projects was at the Head Start facility in Troy.”

The Pike Liberal Arts varsity Patriots swept the Hooper Colts on Friday night in Troy. The Lady Patriots had to... read more