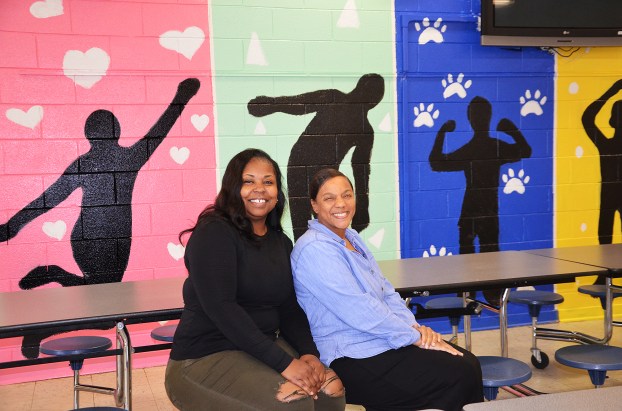 Above: Banks Middle School Principal Shantel Rouse, right, and fifth grade teacher Sontessia Youngblood were “tickled pink” over the mural PCHS Pike Art Club students painted on the walls of the school lunchroom. The mural is a the second-phase of the PCHS mural project funded by an Alabama Bicentennial Schools Grant.

Over the weekend, Banks Middle School was teeming with colorful excitement. Pike County High School art teacher, Carrie McLaney, and members of the Pike Art Club painted a mural on the walls of the school’s lunchroom based on the theme, “Building a Culture of Character.”

At day’s end on Saturday, the mural had been completed, the brushes had been clean and the young artists could stand back and look with pride in a job well done.

The mural was the second that has been completed by the art students since August when McLaney was notified that Pike County High School had been selected along with 200 schools in the state to receive an Alabama Bicentennial Schools Grant.

McLaney said to be one of a selected number of schools inspired and motivated her students to embark on a very ambitious project titled “Building a Culture of Character.”

“The idea for the Bicentennial school project was to create murals for different locations throughout PCHS based on the theme,” McLaney said. “Our goal at Pike County High School is to build a culture of character, a culture of creative and positive thinkers.”

The students have completed four murals at PCHS, in the cafeteria, the seventh- and eighth-grade building hallway and the girls’ restroom and the visitors’ restroom in the gym.”

That would have been enough to fulfill the grant requirements but the PCHS art students and their teacher had other plans including painting murals at Banks Middle School using the same theme, “Building a Culture of Character.”

“In planning a mural for the lunchroom at Banks, we considered several ideas,” McLaney said. “And, it was rather tricky to plan.”

However, McLaney said the students liked the idea of silhouettes in exercise and dance poses.

“They really got excited about creating the characters,” she said. “They drew off the pattern and chose the colors. The girls liked pink and they understood that the accents, including hearts, had to go all around the room. They decided on rainbows to go around the window sills.”

Banks Middle School Principal Shantel Rouse requested that the students’ mural include the water fountain with the focus on the importance handwashing plays in maintaining good health.

“So, they put handprints on the wall with the wording, ‘Wash Your Hands.’ It’s artsy and colorful and also sends a message,” McLaney said.

Rouse said she was pleasantly surprised by the mural, not by the artwork which is wonderful, but how effective the mural is in getting out the message of the importance of maintaining a healthy body through exercise and good hygiene.

“Not only does the bright, happy mural improve the appearance of the lunchroom, it is inviting,” Rouse said. “We want to thank Carrie McLaney and the Pike Art Club for their outstanding work that will be enjoyed by our students for years to come.”

The young artists have plans for two more murals. One will be at the One Stop Youth Center in Brundidge and the other at either the Tupper Lightfoot Memorial Library or Pizza Palace, both in Brundidge.

The mural project is funded by the $2,000 Alabama Bicentennial Schools Grant.

Launched by Governor Ivey in December 2017, the Alabama Bicentennial Schools Initiative encouraged all public, private, and homeschool students and teachers to participate in the celebration of Alabama’s 200th anniversary of statehood in 2019. In early 2018, all K-12 schools in Alabama were invited to submit a proposal that engages in outreach and improvement projects to connect their classrooms with their local communities.

Many people will soon raise their right hands and swear an oath in the presence of District Judge Steven Curtis... read more