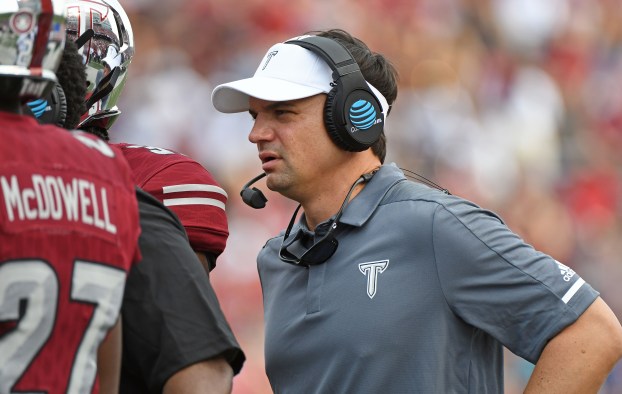 Troy head coach Neal Brown watches on during a timeout during the first half of an NCAA college football game against Boise State in Troy, Ala., Saturday, Sept. 1, 2018. (Photo/Thomas Graning)

Rumors swirled Wednesday that Troy Trojans head football coach Neal Brown had emerged as the top candidate at West Virginia; unofficial reports Friday said the deal was all but done.

The move is no longer a rumor – West Virginia and Troy officials have confirmed that Brown is now the head coach for the Mountaineers.

“I am excited that Neal Brown and his family have decided to call West Virginia University their next home,” said WVU Athletic Director Shane Lyons. “When I started this national search, I learned very quickly that he checked all the boxes of what I was looking for in our next football coach. There is no question that the Mountaineers are West Virginia’s team, and I know our fans are going to love his energy, passion, work ethic and excitement that he is going to bring to our program. I look forward to working together and supporting him and his staff to bring championships to Morgantown.”

Brown has reportedly signed a six-year, $19 million contract to coach the Mountaineers. Brown coached the Troy Trojans for four seasons, leading the program to three consecutive 10-win seasons as well as three straight bowl victories. He also led the team to victories of prestigious Power 5 programs LSU and Nebraska.

Brown said he is looking forward to his new chapter as the head coach of the Big 12 program.

“On behalf of my wife, Brooke, and our children, Adalyn, Anslee and Dax, we are thrilled to join the Mountaineer Football Family and become a part of Mountaineer Nation,” Brown said. “I want to thank President Gordon Gee, Athletics Director Shane Lyons and Deputy Athletics Director Keli Zinn for giving me this tremendous opportunity to lead the West Virginia football program and the young men who give their all for the Mountaineers.

“West Virginia has a long and successful history. I am looking forward to adding to that great tradition and strengthening our place in the Big 12 Conference and nationally. We will work hard, play hard and do things the right way to make the people from the great state of West Virginia proud of their program. That will be a foundational element of our culture. I can’t wait to meet our team and get to work.”

“Troy University enjoys a rich tradition of success in athletics, which has been enhanced by the outstanding work of Neal Brown over the last four seasons,” Hawkins said. “On behalf of the Board of Trustees and the entire Troy University family, we wish Coach Brown and his family well as they depart for West Virginia University. We are confident Troy University will continue to build on this foundation of success, and we will conduct a national search to find the right leader to take our football program to even greater heights.”

Athletic Director Jeremy McClain said Brown helped turn Troy University into “one of the premier Group of Five programs in the nation.”

“I want to say thank you to Neal and Brooke Brown and their family,” McClain said. “They have been great representatives of Troy University, our athletic department and this community. We wish them nothing but the best in the future.

Charles Henderson High School Principal Brock Kelley issued a new challenge to his students this year: a competition for the... read more