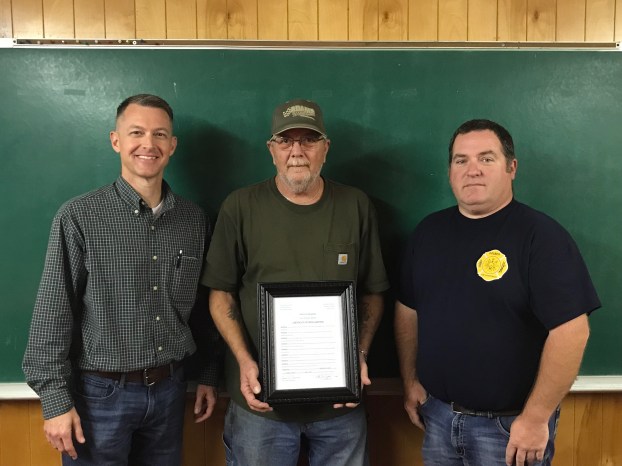 Mark S. Miley (center) was honored Thursday night for serving as chief of the Goshen Volunteer Fire Department for 25 years. Miley was a founding member of the department and oversaw much growth over the years. He was presented a proclamation from mayor and fellow firefighter Darren Jordan (right) and Rep. Wes Allen (left).

“He’s an extremely selfless person,” said Mayor Darren Jordan, who is also a member of the Goshen and Troy Fire Departments. “He’s not going to say that about himself; I will. There have been a lot of young men come through the high school … I know of two guys graduated from Goshen in the room right now that he had a major influence on moving us that way. There are a couple more not here that are still actively firemen with the City of Troy. All of that would not have come had we not had somebody like Mark pushing us.”

Miley is one of the founding members of the department and has served as chief for 25 years.

“Back in the mid-90s … this department at that time was even ahead of some stuff the City of Troy was doing,” Jordan said. “ … Mark was the reason for a lot of that. He pushed us on that. Mark brought one of the first rural EMS (emergency medical services)response to the rural areas of Pike County, other than Brundidge, that had ever been.”

Jordan said many people don’t realize the sacrifice that not just the firefighters make, but their families make.

“A lot of the people … probably don’t know the nights that y’all probably didn’t have dad at home,” Jordan said. “2, 3 in the morning. He probably missed birthdays, Christmas events. A lot of people never understand the sacrifice, not only he makes or any of us make, but the families make … In this environment you go and help somebody you don’t know for nothing in return except maybe a pat on the back.”

Jordan presented Miley with a proclamation for his service to the town and surrounding community.

The proclamation recognizes some of the highlights of Miley’s career with the department including his addition of three fire engines, a rescue vehicle and a brush truck; receiving half a million dollars in grant funding; and bringing the first AED (automated external defibrillator) to the community far ahead of its time.

Miley said he appreciated the honor and his service to the community.

“I enjoyed teaching y’all what I knew at that time,” Miley said. “Everybody that knows me knows I don’t like crowds. I try to do what I do one on one … but I appreciate this everybody.”

The Troy Trojans had little answers in an 88-75 loss to the hot-shooting Costal Carolina Chanticleers in the Sun Belt... read more