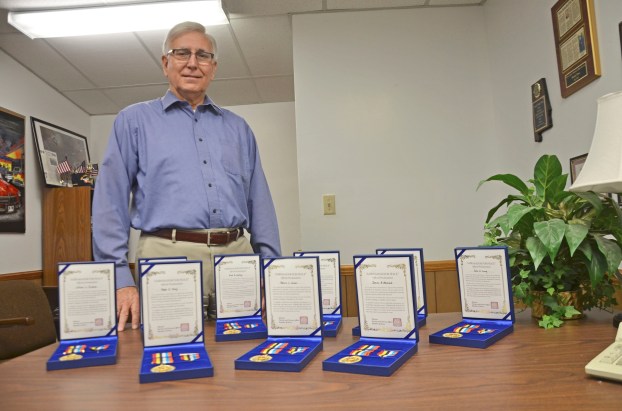 The Embassy of the Republic of South Korea is honoring Korean War veterans with the Ambassador for Peace medal. The medal is an expression of appreciation from the Korean government to the United States service men and women who served in the Korean conflict from June 25, 1950 to July 27, 1953.

“Attempts were made thorough different media outlets to notify veterans of the Korean War that these medals would be awarded,” Ross said. “It was then up to the veterans to establish eligibility for the medal.”

Ross said if a veteran was a Navy service member and had served aboard a naval vessel he or she was eligible if the vessel was assigned into Korean waters during the 1950 to 1953 time-frame.

The Korean American Peace Medal could be awarded posthumously to the next of kin on behalf of the deceased veteran.

“The Embassy of the Republic of South Korea made every effort to inform those who served in the Korean conflict of the availability of the awards,” Ross said. “Here in Pike County, we have 16 veterans who have received or will receive these Korean American Peace Medals.”

“It was a very impressive ceremony and also an emotional one,” Ross said. “It would have been difficult not to be moved to see these men, who are now in the later stages of life, recognized as ambassadors of peace.

“It is often said that only young men fight wars. The Korean War veterans were young men when they went to fight and many of them still carry the scars of war. It is a good thing for them to be honored for their service and their commitment to peace.”

Dunn said being at the ceremony to receive his medal from the Republic of Korea was important to him.

“It meant a lot to receive the medal,” he said. “I never thought I would get anything like that. Korea is known as the ‘forgotten war.’ But getting the medal let us know we are not forgotten. I was proud to be there but it was tough, too. There were so many veterans in wheelchairs. I am blessed that I don’t have to be.”

Dunn wouldn’t say how old he was when he served in Korea.

The “Ambassador for Peace” medal presentation brought back memories for Dunn

“We were not over there on a pleasure trip,” he said. “I can still remember how cold it was. We didn’t have cold weather gear. We had rubber boots that kept our feet dry but they didn’t keep them warm. I don’t know how my feet didn’t freeze off.”

Dunn retired after 22 years in the Army. He has never had any regrets. He wanted to serve his country and he has great respect for all those who serve.

“I served without expecting anything in return but it’s good to know that others appreciate your service,” he said. “‘The Ambassador for Peace’ medal lets us know we are not forgotten.”

Ross said an official proclamation from the Minister of Patriots and Veterans Affairs, Republic of Korea expressed the everlasting gratitude of the Republic of Korea and its people for the service performed by American veterans in restoring and preserving the country’s freedom and democracy.

“The proclamation recognized the sacrifices made in helping Korea reestablish its Free Nation,” Ross said. “The minister of Patriots and Veterans Affairs extended the good wishes of the people of the Republic of Korea. He asked that both Korea and the United States reaffirm their mutual respect and friendship and that they may endure for generations to come.”

Ross said plans are being made for the medals to be presented to the local Korean War veterans who did not attended the ceremony in Montgomery. The ceremony will be hosted by the Pike County Veterans Affairs Office and American Legion Post 70 in Troy. The date and place will be announced when plans are finalized.

Charlie Dunn, James McGlaun and John W. McGuire will be invited to participate in the local ceremony.