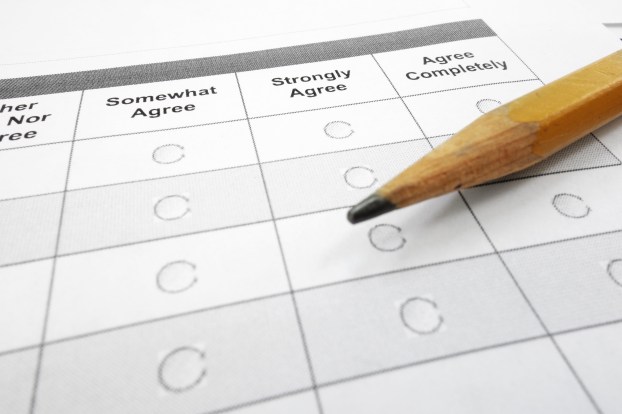 closeup of a survey questionnaire form and pencil

The results of a survey on the Troy City School System are in and the results show areas where the public is satisfied and dissatisfied.

Most people were somewhat satisfied with the school’s curriculum, technology and facilities, while most respondents were dissatisfied with local revenue devoted to the system.

A total of 521 people participated in the survey. It was mostly completed by Troy citizens – almost 95 percent responded that they are currently residents of Troy while 5 percent were not.

The majority of participants were not a parent or guardian of a current TCS student, with just over 50 percent reporting. Parents of Troy Elementary School students made up 32 percent of respondents, 22.5 percent were parents of Charles Henderson High School students and 9.5 percent were parents of Charles Henderson Middle School Students.

Nearly 46 percent of people who took the survey were parents or guardians of a former TCS student. Over 40 percent of participants were former students of the system and 16 percent of respondents are employed by the system. Seven current students participated in the study, just over 1 percent of the response.

Mayor Jason Reeves said no matter what level of involvement an individual has with the school system, it has an impact on the entire community.

“The point of the study was to provide an outside, expert opinion that would start and process and a dialogue among all stakeholders in the community on working toward providing the best education possible for the children in our community,” Reeves said. “Everyone in the community, whether you have four kids in the system like I do or don’t have any, is affected by public education.”

Participants in the survey were given seven categories to rank in order of highest priority for the school system. Student safety was not included in the options, but was stated as the top priority in the question.

Over 63 percent of respondents ranked curriculum and instruction as the top priority for the school system. Another 24 percent ranked it as the second priority and 7 percent marked it as the third priority.

Adequate funding and financial stability was seen as the top priority by 26 percent of the people surveyed and 32 percent marked it as the second priority.

Facilities came in next with 66 percent of respondents ranking it in the top four.

Technology was right behind 61 percent of people including it in their top four.

Extracurricular activities including arts and sports and community partnerships round out the list.

The same seven categories were given for respondents to rank in order of TCS greatest strengths.

Curriculum and instruction was the category most voted as the greatest strength for TCS, with 35 percent marking it the system’s strongest category. Very close behind were the facilities, which 30 percent marked as the system’s greatest strength. Extracurricular activities were also seen as a strength for TCS, with 23 percent marking it as the strongest asset for TCS. Both community partnerships and technology were both chosen as a top strength by 12 percent of people. The weakest category according to participants is adequate funding and financial stability, which was marked last by 22 percent of people.

The three areas in most need of improvement according to participants are adequate funding and financial stability, curriculum and instruction, and facilities.

While possibilities were included in the study to increase local funding, Reeves said it is too early to make any decisions.

“You can’t throw money at something and expect it to be fixed,” he said. “We’re not at that point. There are a lot of things we’ve got to work on and we’re a long way from the point of considering (a tax increase or other financial incentives from the city). Pushing in that direction right now shortchanges us on things we need to do to be engaged and helping make the schools more successful.”

Reeves said it will take the participation of the entire community to improve the system moving forward.

“If we’re going to provide the education necessary for us to keep our community growing, to give our kids the best possible education, and to give our workforce competent and capable partners, then we’ve all got to come together to accomplish that,” Reeves said. “We need to get as many people included in the plan moving forward as possible,” he said, adding that it will not be a simple or quick process. “We didn’t get in this position overnight and we’re not going to get out of it overnight. It’s going to take all of us working to do it.”

You can read a full copy of the report here.

TURKEYS FROM HEAVEN: Volunteers give away meals for Christmas

When the Josie Moonshine Queen comes out of the hollows and a couple from upstate New York sits down with... read more