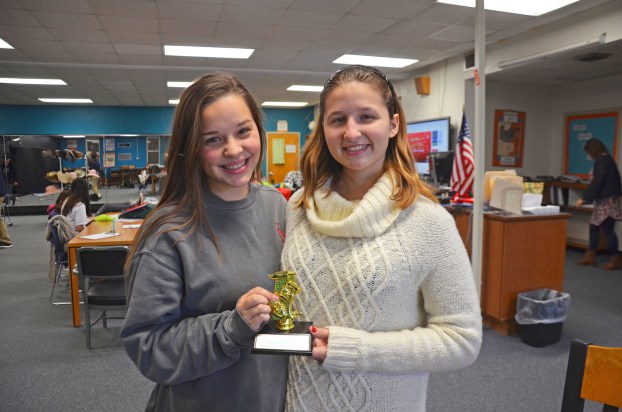 Regan Gross and Ingrid Lieb show off the second place trophy they earned for their duet performance of a scene from “The importance of being earnest” at the Walter Trumbauer Festival at Troy University.

Ingrid Lieb and Regan Gross finished second at the Walter Trumbauer Festival at Troy University for their duet performance of a scene from “The importance of being earnest.”

“We both basically wanted to do something classical because we had never done that before,” Gross said. “So we started looking around and we both came across ‘The importance of being earnest’ separately. It was kind of ironic.”

Lieb said the scene allowed both actresses to stretch their dramatic and comedic chops.

“In the scene, basically we’re both engaged to the same guy but we don’t know it until we have this scene,” Lieb said. “We thought we could really raise the stakes with it; we almost fight.”

“She thinks I’m too young and she envies my beauty while I think she’s too old and I envy her maturity,” Gross said. “So we have these arguments and throughout it we always have to keep proper composure. It was fun to play and just react off of each other.”

Gross said she and Lieb began working on the piece in mid-September and really began fine-tuning it after advancing through regionals.

“After regionals we wanted to do something a little bit more to make it bigger; we added more things to the scene to make it more intense,” Gross said. “Every time we did it we tried to be as authentic as possible and if I noticed she did something, I just naturally reacted to that. It was a lot easier to figure out blocking with the help of Ms. (Judith) Park and Jonathan Carswell.”

The girls said they were not expecting their performance to place so high.

“I screamed,” Gross said. “I almost cried. I completely changed, I had already taken my makeup off and was ready to go home. When they said our category, it still didn’t register until everyone around us started screaming.”

In addition to the duet award, Lieb also won first place in a competition at the University of South Alabama in the playwriting category.

Lieb said the play she submitted was the first she had ever written.

“It was so emotional; it was the first time I had ever done playwriting,” Lieb said. “I had been thinking it was something maybe I wanted to do and then Ms. Park came to me on the first day of school and told me about this competition. From that point on, I was writing every day. It was my baby and I loved it and cared about it.”

The play, titled “Incandescent,” is 50 pages long and Lieb said it would take about 50 minutes to perform.

“It’s about a woman who kind of goes crazy after her husband is drafted for World War II,” Lieb said. “The premise is about the dreams that she has. The performers are acting out the dream a lot of the time. Soon the dreams become hard to distinguish from reality.”

Gross said she got to read one of the scenes early on and it blew her away.

Lieb said hearing the words she penned being spoken by performers was a special moment.

“When people read it back to you, it becomes real,” Lieb said.

Now Lieb is eagerly waiting for USA to send her a DVD copy of a student director leading a read-through of the script and she hopes that the drama class may perform pieces of the play next semester.

Lieb said she wants to continue being involved with drama after she gets out of school.

“I love it so much,” Lieb said. “Every part of the playwriting process was amazing. Even when people read it and critiqued me on it, I never felt discouraged. I definitely want to pursue it in some way in my future.”

As far as fun goes, the women at Wednesday’s Female Factor blew the top off the hilarity scale. After lunch,... read more