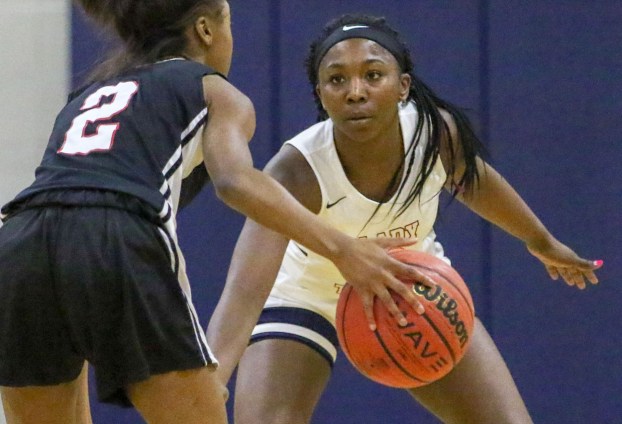 The Lady Trojans of Charles Henderson High improved their perfect overall record to 7-0 Thursday evening with a 54-35 win over Class 6A Dothan High in Betty Wagner Gymnasium.

This marked another game for the Lady Trojans without Maori Davenport, who is awaiting the ruling of an appeal after she was ruled ineligible by the AHSAA earlier this week.

Despite the absence of the dominating center, the Lady Trojans were as aggressive and tenacious as ever on offense and defense, with four of five starters ending the night in double figures.

“We are still taking it one day at a time, and even without Maori it is still five-on-five out there. Our girls are going to keep pushing. It’s hard on our girls with the situation with Maori, but they understand regardless they have got to keep fighting. We are pushing for her.”

It was announced Tuesday that Davenport had been ruled ineligible by the Alabama High School Athletic Association.

One of the nation’s top 15 players and a Rutgers signee, Davenport received a check by USA basketball for her participation on the U18 team this summer in the FIBA Americas U18 Tournament in Mexico City.

“The Alabama High School Athletic Association has deemed her ineligible,” Charles Henderson High School Principal Brock Kelley said earlier this week. “Right now we are in the preliminary stage of the appeals process. We feel like we have a good case to appeal.”

Even in the absence of the center, Coach Jones is proud of the way her girls push forward.

“We are doing a great job,” said Jones. “Maori is right there with us, the attitudes are right and we are keeping our hopes up high. We just hope that she will be joining us soon.”

The Trojans travel to play Andalusia on Friday night.

PARK CHRISTMAS: Santa and Mrs. Claus usher in the season

Santa Claus is a very recognizable figure but unless Mrs. Claus is with Santa, few people know her. But on... read more