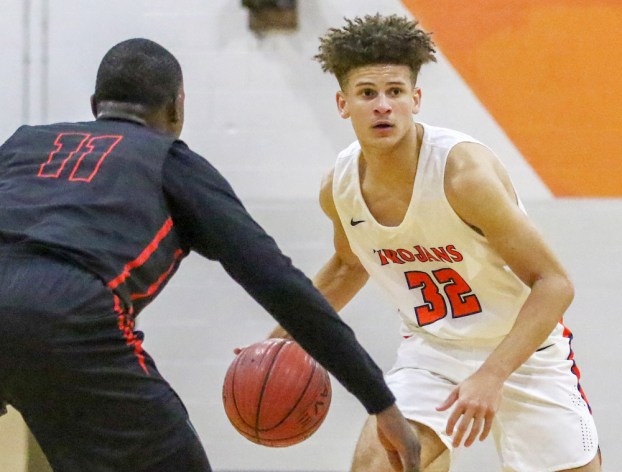 Back on track: Trojans snap two-game losing streak with dominating win over Dothan

The Charles Henderson High boys basketball team turned a close first-quarter contest into a runway yet important win, with a 65-46 victory over Dothan High Thursday night in Troy.

Improving to 5-3 on the season, the Trojans had clutch production from Keonte Brantley with 19 points, Marcus Grant with 17, Terrell Sistrunk scored 14, Keith Wheeler nine, while Bradley Caldwell, Jay Taylor and Devin Parker had two points each.

“We’re getting better, and that is the best part,” said CHHS Head Coach Doug Branson. “The win is nice, it’s always good to get better during a win. It’s another game under our belt, we are playing quality competition. We played well tonight and executed for the most part, better than we have. It is still not to the level I want it at all. We had too many unforced turnovers, too many poor decisions we made in transition. When we clean that up we can turn ourselves from a decent team to a good team.”

The Trojans are on a grueling eight-game trek within a 12-day period, one that Coach Branson knows his team will have to focus on effort as much as execution.

“Right now we are in the midst of eight games in 12 days,” said Branson. “For now it is about preserving ourselves. It is about effort over execution in the coming days. We have got to have maximum effort and we will work on our execution when we have a chance. We are not going to have a lot of practice time, so we are going to have to play other teams as opposed to trying to out-execute. We are going to harp on execution, but our effort has got to be there for us to be successful over the next 11 days.

The Lady Trojans of Charles Henderson High improved their perfect overall record to 7-0 Thursday evening with a 54-35 win... read more