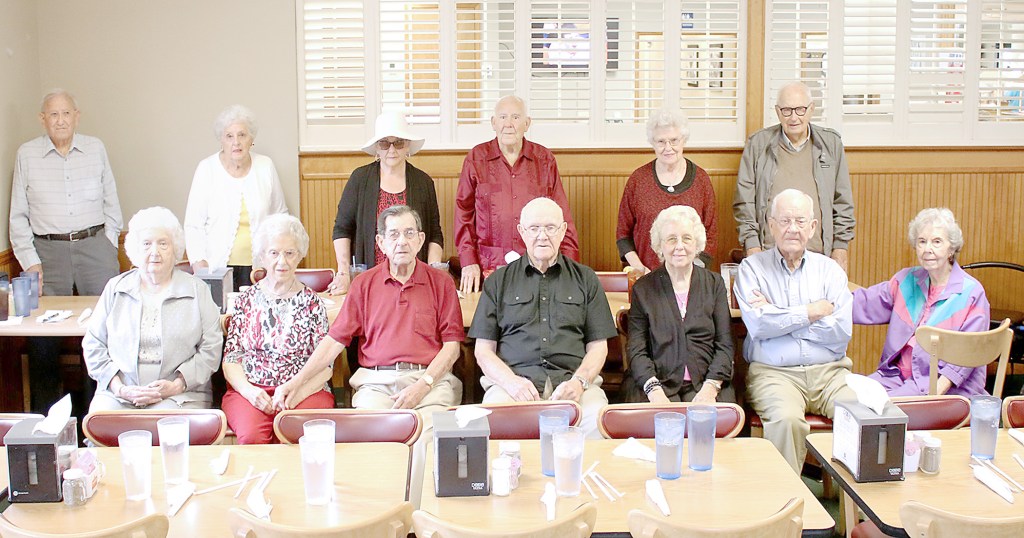 Bikinis were becoming fashionable and television sets were appearing in more homes.

And, down south in Troy, Alabama, the Troy High School Class of 1948 was ready to step out into a big world of wonder.

On Saturday, October 20, 2018, nine members of the Troy High School Class of 1948 gathered at Julia’s Restaurant for its 70th reunion.

“There are a few more of us but we weren’t able to get in touch with everyone,” said Mary Alice Carter Sanders. We were proud to have nine. It’s been a long time since 1948.”

Sanders said one class member, who was in rehab, said if she were not able to attend the reunion, she wanted someone to drive her to the restaurant so she could look in through the window.

“Thankfully, she was able to be there,” Sanders said. “It was important to all of us to be there.”

Looking in for the outside, one might think that the former classmates would have spent their time together looking back on those school days, “dear ol’ golden rule days.” But, Sanders said, they were more interested in the present.

“We were more interested in knowing about what each person was doing, about their families and what they knew about those that weren’t able to attend,” Sanders said. “But we did talk some about our school days. Back then, we didn’t have buses to take us to school and I remember walking to school from where we lived on Skinner Crossing off South Three Notch Street to the schoolhouse on Elm Street.”

“She was a pretty lady with real white skin. She loved pansies and she wore them as often as she could,” Sanders said. “In her class, we painted pansies and I loved them, too. Now, the faces have been taken off pansies and that’s sad. Pansies need faces for us to enjoy.”

Sanders said, she, like most of her classmates “took D.O.- Diversified Occupation.” The students took classes in the morning and worked in the afternoon. Sanders worked at Edge Hospital as a nurse’s aide.

Sanders said, in the aftermath of WWII, many of the young men in the Troy High School Class of 1948 were anxious to answer Uncle Sam’s call.

“We have a long list of veterans in our class,” she said. “They were proud to serve.”

Seated nearby where the THS Class of 1948 was enjoying renewing old friendships, members of the Mercer College basketball team were enjoying Julia’s buffet.

“One of our classmates was talking with the players and told them that we all graduated high school here in Troy 70 years ago and that made us all way past 80 years,” Sanders said. “He told the players to take a good look at us because, in 70 years, that’s how they would look.”

To the delight of the classmates, the young Mercer man said, “If we look that good, we’ll be in good shape.” And that was a high note on which to end the THS Class of 1948 reunion.