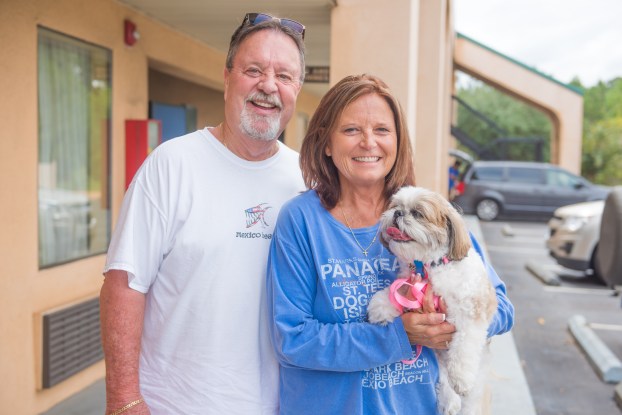 Mike and Tina Williamson, along with their dog “Allie Bama Crimson Tide Moore,” were hoping to weather Hurricane Michael at the Troy Econolodge Tuesday night. The couple came in to Troy from Mexico Beach Tuesday after a mandatory evacuation was announced in their area. Mike said Troy offered a place just far enough away form the projected path of the storm to feel safe and the hotels also allowed for them to bring their precious pet along, which they couldn’t find in some other places.

As Hurricane Michael barreled toward the Gulf Coast Tuesday night, Pike County was serving as a refuge for evacuees even as officials across the county prepared for potential impacts locally.

Despite projections that the hurricane would be arriving just off the Gulf Coast within 12 hours, interim EMA Director Herb Reeves said it was still too soon to tell how impactful the storm would be in the region.

“It isn’t expected to make that eastward turn really until it makes landfall,” Reeves said. “They’re still expecting it right now (6:30 p.m. Tuesday) to be coming in between Destin and Apalachicola.”

The major danger, Reeves said, is if the storm doesn’t turn eastward as expected. Pike County is under a tropical storm warning as Michael intensified yet again Tuesday afternoon to become a Category 3 storm with sustained winds up to 120 miles per hour. It was expected to intensify even more overnight as it draws closer to the shoreline.

Mike and Tina Williamson were hoping Tuesday that they had come far enough from their home in Mexico Beach, Florida to escape the brunt of the weather.

“We kept thinking we were going to stay, and then they declared a mandatory evacuation,” said Mike. “Well, we’re not so stupid as to stay if they’re telling us to leave so we got out of there. I’m actually surprised to see so many people still staying there.”

Mike said they considered going west at first, but realized that wasn’t a good idea because they’d still be on the coast if the storm took an unexpected turn.

“And we didn’t think Dothan would be far enough,” he said, holding the family’s dog, “Allie Bama Crimson Tide Moore.” “We thought about going to Montgomery, but everywhere we called up there wouldn’t let us bring a pet, and we sure as heck couldn’t leave her.”

They were able to find a room that would allow pets at the Econolodge in Troy – most Troy hotels relaxed their rules on pets for evacuees in need, and many of the others had been booked solid already by other evacuees.

Although the county is offering shelter to many evacuees, the storm has already had an impact across the county, with schools and government offices electing to shutter their doors for the day.

Dr. Mark Bazzell, superintendent of Pike County Schools, made the call Tuesday afternoon to cancel classes at all schools within the system on Wednesday.

“Due to the possibility that Hurricane Michael will bring winds to Pike County that will threaten travel for high profile vehicles such as school buses, school will be cancelled

The City of Troy and Pike County offices are both closed Wednesday except for emergency services. Law enforcement officers including the Troy Police Department and Pike County Sheriff’s Office are prepared for the storm and Troy Utilities workers are on standby for power outages.

“All of the electric folks will be coming in on standby all day (Wednesday) and overnight,” said Brian Chandler, utilities manager. “We will all be ready to go respond to outages as they occur unless the weather is unsafe. Then we’ll go as soon as it subsides.”

Once things clear up in Troy and any power outages are resolved, Chandler said the team will be ready to go assist in restoring power in the harder-hit Florida panhandle.

Wednesday’s garbage route will be picked up Thursday, said Jason Reeves. He urged residents not to put out garbage for pickup Wednesday, as strong winds are likely to blow the trash everywhere.

Robin Sullivan, chairman of the Pike County Commission, said equipment has been positioned all over the county for the road department to respond to fallen trees and other issues Wednesday.

Alabama evacuation routes are carrying heavy northbound and westbound traffic from the Florida Panhandle. All evacuation routes are expected to remain congested until after landfall. Even then, these same routes will see heavy volumes of relief convoys and residents returning through Alabama.

Across southeast Alabama, major routes such as U.S. highways 231, 331 and 431 and Alabama Highway 167 are already seeing high traffic volumes. Along U.S. Highway 231 from Dothan to Troy, traffic signals have been adjusted to give as much priority time as possible to northbound evacuation traffic.

Editor’s note: The Messenger team will be tracking this storm all day as it approaches the Gulf Coast, bringing you news of closings and potential weather impacts. Stay tuned for online updates via our website at troymessenger.com and on social media.

Getting defensive: Defense paving the way to Patriots success

The Pike Liberal Arts Patriots have started the season 8-0 and their defense is a big reason why. The Patriots... read more