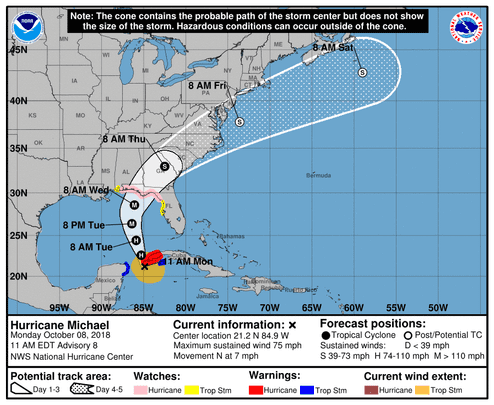 Pike County officials are preparing in the case that Hurricane Michael shifts west and brings a more significant impact to the local area.

Herb Reeves, interim EMA director, said it’s too early to tell exactly how much the storm will impact the county.

“We don’t have a clue yet,” Reeves said. “It looks right now like it stays more toward the east; in that case we’re probably going to have some rain or some lighter winds. If it shifts west, that changes the game for us.”

Daniel Martin, meteorologist for the National Weather Service, said the general consensus is that the hurricane will track east and not have a big impact on Pike County.

“Right now we’re just looking at heavy rain and wind gusts of 20 to 30 miles an hour,” Martin said. “We’ll be on what we consider the good side of the storm.”

Martin said the tropical storm was just upgraded to a category 1 hurricane at approximately 10 a.m. Monday morning. The hurricane is expected to continue strengthening as it approaches the coast, nearing the Florida panhandle Wednesday morning. The weather service projects that the storm will be a category 3 when it makes landfall and takes a harder turn east through Georgia.

Martin said there is still “one main model” that does show the possibility of the hurricane tracking further west that would bring more impact to the Pike County area.

Reeves said there should be more information available after 5 p.m. as the hurricane enters the Gulf of Mexico.

“It’s got to get out in the gulf to see what it’s really going to do,” Reeves said. “I’ve already sent out an email to our department administrators and law enforcement that we’re monitoring it right now.”

Although there is no significant impact projected for Pike County yet, Reeves urged residents to remain alert as the storm develops.

“The problem is that this has been a pretty rapidly developing storm,” Reeves said. “It’s expected to make landfall Wednesday afternoon or evening; That’sot much time if it shifts back west and intensifies.”

The Messenger team will be following the development of this hurricane and updating the website and social media as it approaches the coast.

Friends, family, current and former fellow officers – most anyone touched by the life and career of Capt. Sonny Schrieber... read more