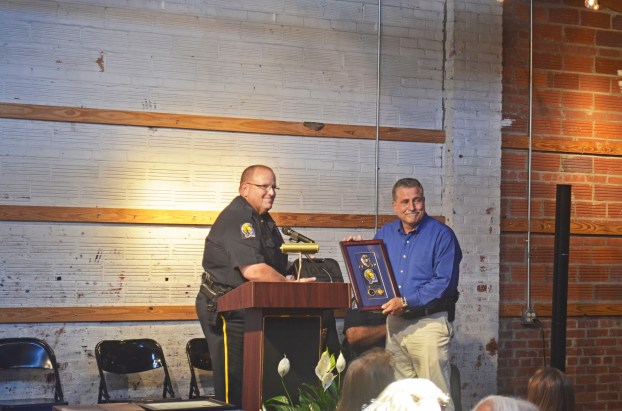 Friends, family, current and former fellow officers – most anyone touched by the life and career of Capt. Sonny Schrieber was at a ceremony Friday to honor him as he retires from the Troy Police Department.

Through the testimony of numerous people who know him, Schrieber was celebrated as a good man and a great detective.

“Sonny has gained a wealth of knowledge and experience working all kinds of cases over the 35 years he has served this department and his community,” Troy Police Chief Randall Barr. “I have learned a lot from him over the years and truly appreciate his leadership and his willingness to share that with others.”

In his 35 years on the force, Schrieber worked under chiefs Grady Reeves, Anthony Everage and Jimmy Ennis. All three had kind words to say about him Friday.

“When I think of (Sonny) I think of the worst times I can think of in this department,” Everage said. “I can remember sitting in my office for hours and hours. I learned early on being a police chief the one thing nobody wanted was excuses. Sitting in there you had to have the results and you had to make things happen and you (sonny) were always one of the people that make things happen. And for that I will be eternally grateful.”

“We worked together on some tough things and you were always able to get the job done,” Ennis said. “You’re very good at what you do, and I have no doubt that you will be missed very much.”

Det. Brian McLendon said he learned from Schrieber most when interrogating suspects in a capital murder case in Needmore.

“I was a young detective, I wanted that confession,” McLendon said. “I had never been to interview school. I went in there by myself to interview on a capital murder case.”

After getting nowhere, McLendon stepped out of the room and Schrieber invited him outside “to smoke.”

Schrieber told him that his interview technique wouldn’t work the same for every person and explained he wasn’t going to get anywhere interrogating the suspect as he was.

“I sat in the media room and watched Sonny … get confessions from capital murder suspects, totally opposite of what I was doing. That right there made me better than I’d ever thought I wanted to be because I always pushed to have that kind of knowledge. That man right there knows what he is doing behind the badge.”

Many others had kind words to say about Schrieber – Mayor Jason Reeves, Lt. Greg Wright (who gave Schrieber a lifetime Cracker Barrel gift card in reference to a special memory between the two), Rep. Alan Boothe, the US Marshals, members of his Emergency Response Team, Homeland Security and more.

“I’ve learned so much,” Schrieber said. “I wouldn’t be here today without any of y’all that taught me how to be who I am. The chiefs were kind enough to say so many kind words, but they failed to tell you the times I was in their office and they were knocking me on the back of the head or kicking me in the butt trying to get me to go the right way and do the right thing, but it was all a part of it … I can’t stand up here and say anything adequate enough to show my appreciation and my love for all of you and everybody I have learned from that has helped me on this path and to become who I’ve become … I’ve been truly blessed.”