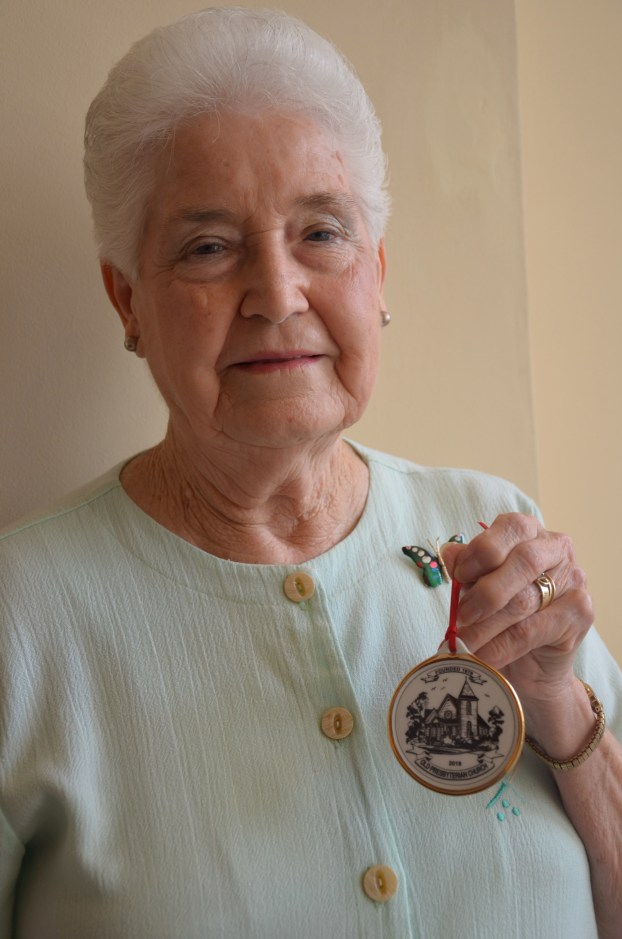 Troy artist Ruth Walker designed and created the second ornament in the Johnson Center for the Arts’ collectable series. The ornament depicts the First Presbyterian Church in Troy that was founded in 1878.

The Johnson Center for the Arts was a-buzz with excitement Wednesday as the second ornament in the JCA’s collectable series was unveiled.

The ornament depicts Troy artist Ruth Walker’s computer-generated drawing of the First Presbyterian Church in Troy that was founded in 1878.

The church no longer exists but it is a storied part of Troy’s history, Walker said.

“The Reverend Claggett came to Troy and organized First Presbyterian Church with 18 members enrolled,” Walker said. “In 1883, the Ladies Aid Society purchased a lot on the corner of Academy and Cherry streets as the site for the church.”

In the 1950s, the church experienced rapid growth. A new building was constructed in 1963 on George Wallace Drive.

and will be a keepsake for all who appreciate the history of local churches and the City of Troy,” said Wiley White, JCA exhibitions coordinator. “

Walker said the image for the ornament was designed using an old photograph of First Presbyterian Church.

“I took a photograph of an old painting of the church,” she said. “I used Adobe Illustrator to create the computer drawing for the ornament.”

The image appeared somewhat larger on the computer screen but Walker’s working design was the actual size that is displayed on the ornament.

“The drawing of the church had to be produced line by line,” Walker said. “Every line had to be exact in order for the image to print clearly. It was time consuming process. It took a very long time but it was worth every minute of it. I loved doing the drawing for the ornament and hope that others will appreciate and enjoy having one of the ornaments.”

The First Presbyterian Church ornament is the second in the JCA’s ornament series that was initiated in 2017. The first ornament design, also created by Walker, was of the old Troy Post Office, which is now the Johnson Center for the Arts.

“These ornaments may be used as Christmas ornaments or just as decorative ornaments for the home or office,” White said.

The ornaments are readily available at the JCA at 300 East Walnut Street in downtown Troy.

JCA hours are 10 a.m. until 5 p.m. Wednesday through Friday and until 3 p.m. on Saturday. Admission is free.

Troy University and City of Troy police are searching for a man who robbed a student at gunpoint on campus... read more