Goshen moves to 2-0 in region after knocking off Samson 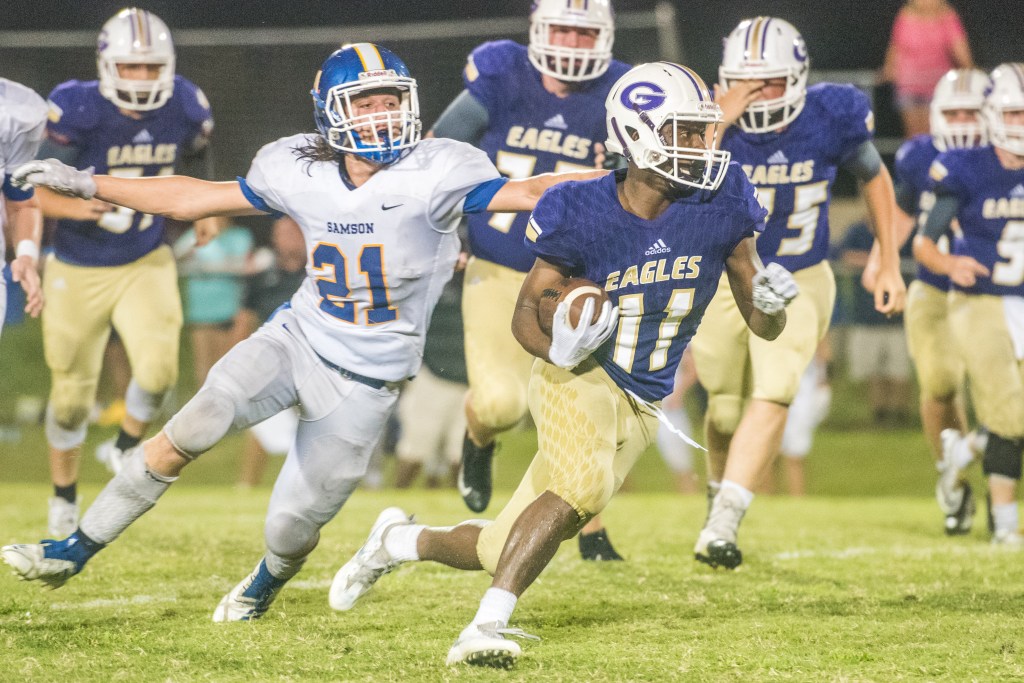 The Goshen Eagles (2-1) hosted regional foe Samson (2-1) on Friday night in hopes of moving to 2-0 in regional play.

Goshen did just that, shutting out the Tigers 18-0.

Goshen struck pay dirt first, finding the endzone on its second drive of the game after throwing an interception on its first.

It was a 50-yard drive that ended with a six yard touchdown run by JaMarkus Sanford to give the Eagles a 6-0 lead.

The Goshen defense was given even more rest thanks to a Samson fumble and Goshen recovery on the ensuing kickoff.

After the first quarter ended, Caleb Dawson took a fourth down handoff 28 yards for a touchdown to put Goshen up 12-0 after the failed two point conversion.

Neither team could get much going for the remainder of the first half as both quarterbacks struggled to find a rhythm.

Samson’s final drive of the half moved into Goshen territory but Tiger quarterback Hayden McCoy threw an interception to end the drive.

At the half, Goshen and Samson had combined for just seven completed passes on 25 attempts and two interceptions.

The Eagles held a decisive advantage on the ground, though, outrushing the Tigers 84-14.

The break served Goshen well as the Eagles came out of the half and used a quick six-play drive to extend its lead with a touchdown. Quarterback Bryan Galloway scored on a 12 yard keeper. The two point conversion was no good, making the score 18-0.

The Tigers seemed to have an answer, marching down the field via the ground and getting inside the Goshen 10 yard line.

Samson then fumbled the ball and the Eagles returned it to their own 31 yard line.

The new Goshen drive didn’t last long, however, as Samson took the ball back three plays later with an interception.

A pair of punts later and the third quarter came to an end with Samson in possession and just inside the right side of the 50.

The Tiger drive was another fruitless one, as Samson turned the ball over on downs after seven consecutive carries by running back Keone Hornsby.

Goshen took over and melted much of the clock away but turned the ball over on downs inside the redzone.

Samson took over but only picked up a first down before punting. The Eagles kneeled twice and cinched their second win of the year.

“We’re very excited about being 2-0 (in regional play),” Goshen coach Bart Snyder said following the game. “We still have a lot of work to do and can get better.”

Goshen hits the road next week and will play at New Brockton at 7:00 pm.