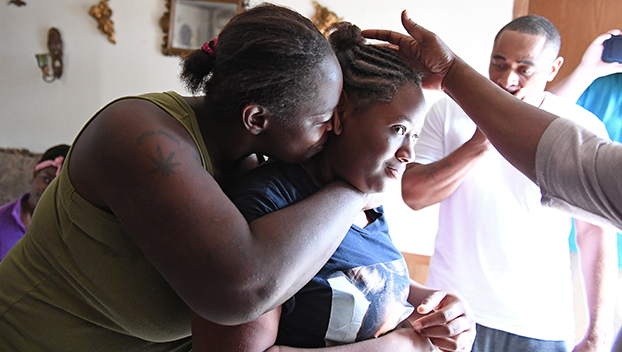 Katrice Robinson Williamson hugs her daughter Shanari Barrow, 11, after Barrow was located at a relative's home in the Meeskville community of Pike County, Ala., Sunday, Sept. 2, 2018. Barrow had been missing for 12 hours after a Troy University football game on Saturday. (Photo/Thomas Graning)

About a dozen members of the family of Shanari Barrow were gathered at the Troy Police Department Sunday morning hoping to have a press conference about the missing 11-year-old.

As family paced anxiously and recounted the events of the past 12 hours, Shanari’s father, Christopher Barrow, received a phone call from his sister-in-law Stephanie.

“She’s got her on the phone,” Barrow said, as the rest of the family thanked God and let out sighs of relief. “She’s in Meeksville.”

Shanari had been missing since the Troy University football game against Boise State Saturday night. The game ended at approximately 8 p.m.

“The last 12 hours the feeling has just been scared, a little angry,” Barrow said after reuniting with his daughter. “We’re just happy to have her again; it could have been much worse.”

After getting the call at the police station, the whole family rushed to their cars and hurried to the home where Shanari was reportedly staying, a cousin’s house. As the family entered the residence, their fears finally faded away for good as they confirmed that she was in the house.

According to Barrow, Shanari did not get the ride home from the game that she was supposed to and instead had begun walking alone down George Wallace Drive, where she was spotted by a family friend.

The man picked her up and brought her to the residence where she was found, thinking that she had notified her parents of her whereabouts.

“She told me she had talked to her parents so I didn’t know everyone was looking for her,” said the man, who wished not to be identified.

Christopher said he was just happy that it was someone she knew that picked her up.

“Really, he saved her,” Barrow said. “This is a lesson not just for me, but for all of us.”

Rypien and Broncos too much for Trojans in opener