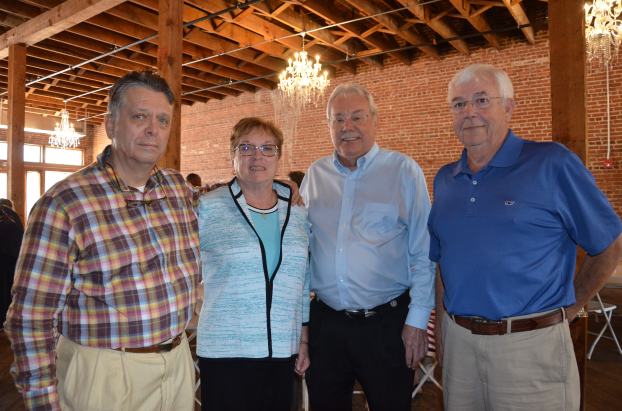 Paul Butler and Karen Ellis Carter had hoped for a good show of interest in a grassroots effort to revitalize the City of Brundidge. The meeting for interested citizens was held at Collier’s on Main in downtown Brundidge Thursday.

“The number of people who attended today’s meeting was very encouraging,” Butler said, as he surveyed the large gathering of business and community leaders. “This was a great starting place. The revitalization of Brundidge is going to take a grassroots effort and today was an indication that people are interested and willing to get involved.”

The meeting had to be moved from Collier’s on Main to Collier’s larger Warehouse event center to accommodate those who attended.

Although neither Butler, a Montgomery architect, nor Carter, a member of the Troy University Board Trustees, lives in Brundidge, they both call Brundidge home and are interested in and committed to re-energizing the town of 2,000.

Carter said the idea for the meeting was to share ideas about the vision for the future of Brundidge.

“It was good to see that there is so much interest in the revitalization, the re-growth of Brundidge,” she said. “Growth will require support from all areas of the community. And we have to be aware that the visions we have will not happen all at once.”

Butler said his interest in the revitalization of Brundidge stems from the debt he owes to the city and its people.

“I have a debt to pay,” he said. “I took a lot out of my community. I had outstanding teachers and good job opportunities. Brundidge did pretty well by me. Now, can I do well by Brundidge?”

Butler’s power point presentation focused on what other communities have done to revitalize their downtown areas and bring growth to their cities.

He challenged others to begin thinking “What can I do?”

“Things don’t happen,” he said. “First steps have to be taken to re-energize a town.”
He suggested awnings, benches, sidewalk improvements, new lighting, live/work zoning, an RV park, a flea market and his pet project a sports wall recognizing the Brundidge and Pike County High School athletes who have excelled after high school.

Chuck Caraway, a business leader and community volunteer, expressed his appreciation for the large gathering of interested community members and presented the question, “What’s the next step?”

He said there needs to be a consolidated effort for community growth that includes city government, business leaders, churches, schools and individuals.

Re-vitalization projects take money and there are not guarantees that they will be successful, Caraway said.

Options for funding projects were discussed and ideas were shared including creating a website for use as a promotional tool, a fountain that offers chlorinated water, a truck stop, a motel, a flea market, landscaping and creating an arts community that includes Troy University students.

Marsha Gaylard, Pike County Economic Development president, said efforts to revitalize a community take local people who care enough to invest time, talents and money. When people are willing to do that, communities will grow.

Another grassroots meeting will be forthcoming but no date was set.

When Chad Copeland and Russell Johnson joined the Pike County Commission in 2017, they began looking at the state of... read more