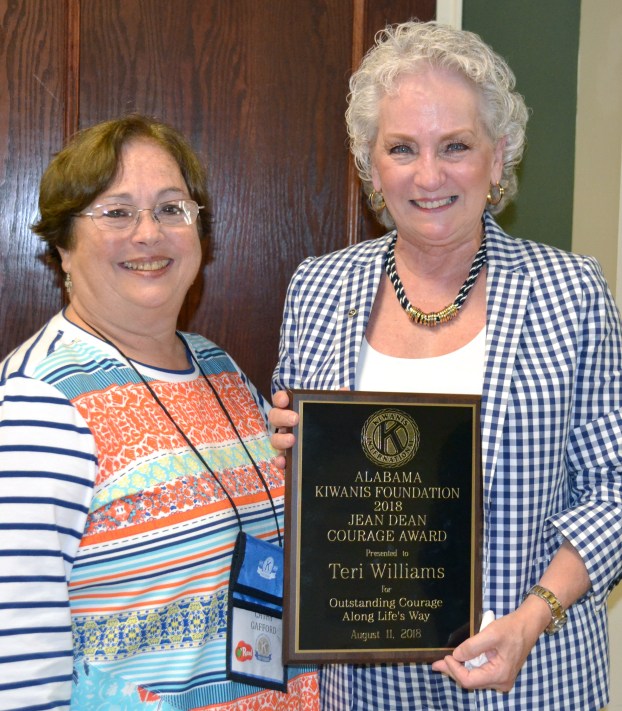 She was recognized with this award because she cares about others and has deep inner courage, which gives her the strength to soldier on and continue helping others, as well as her own family, in the face of adversity every day, said Cathy Dean Gafford of Opelika, who presented the plaque on behalf of the foundation and her family.

“The person we are honoring today is a pretty woman with a sunny personality, someone smart and caring, a professional businesswoman who also has a heart for helping others, especially children,” Gafford said during the ceremony. “I believe courage comes in lots of different forms,” noting that some have lifelong physical challenges, while others face sudden health battles.

“Over the past three years, Williams has had to summon all of her strength to fight a mean enemy, breast cancer – the disease that took her mother,” Gafford said.

Williams was the first female member of the Kiwanis Club of Troy 20 years ago, and she later served as club president. She has worked full time (most of that time commuting an hour from her home every day), traveled the world with her husband, Joel, when he was a Kiwanis International Trustee for three years, and served her club in various offices.

She also has been active with the statewide Jean Dean Reading is Fundamental program, serving as a RIF Team Captain and on the RIF Advisory Board for many years. Kiwanis Club of Troy members participate in RIF by reading to young children in preschool classrooms and giving them books to take home.

“After three surgeries, chemotherapy and radiation treatments, she is still working and still volunteering and still a strong role model for courage to all around her,” Gafford said. “According to her loving husband, she is a marvel, only missing about four days of work due to her fight with cancer.”

Williams changed jobs about three years to avoid the long commute to Montgomery and after her diagnosis had to go to the Montgomery Cancer Center for chemotherapy and radiation – across the street from her previous employer. “They still see the humor in that,” Gafford said. Williams, who was reared in Meridian, Mississippi, attended Millsaps College, graduated from insurance school and got into the insurance business more than 40 years ago. She worked for more than 20 years as an underwriter for an insurance company in Montgomery. Three years ago, she took a job with an insurance agency in Troy to be closer to home.

She enjoys spending time with their blended family, which includes a son and a daughter, plus seven grandchildren. “And with a maiden name like O’Flinn, it was a natural for this brave lady to go to Ireland for a recent birthday,” Gafford said. “I can see the toughness in this Irish descendant – a lady with definite grit and the ability to carry on in the face of adversity …

“I am proud to present the 2018 Jean Dean Courage Award to Troy Kiwanis Club member Teri Williams – the ‘bride’ of Joel, the ‘pride’ of the Alabama District, our fiend who has exemplified the spirit of Kiwanis as she traveled around the world, and a lady who has shown true courage in her battle with cancer.”

Williams was nominated for the award by a Birmingham Kiwanian. Sidney Lanier of Wedowee served as chairman of the 2018 Jean Dean Courage Award Committee.

If Thomas Wolf’s belief was right, then you really “can’t go home again.” But, if mistaken, even slightly, then going... read more