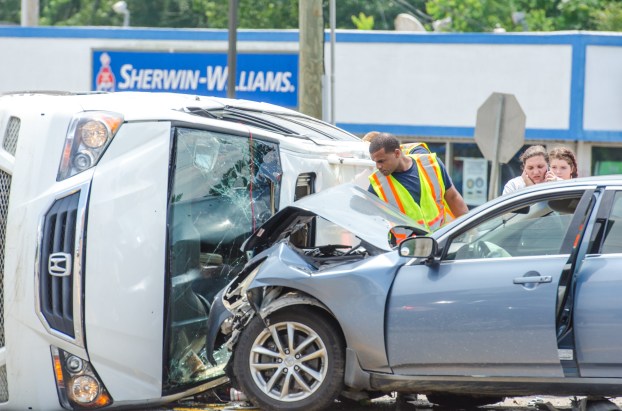 Two vehicles collided on U.S. Highway 231 when a driver attempted to cross traffic and turn left onto the busy thoroughfare.

A vehicle travelling south on the highway smashed into the driver side of the crossing Honda Odyssey, flipping the van before both cars finally stalled in the center turn lane.

Motorists and nearby pedestrians rushed to the scene of the crash to assist the occupants. Some assisted a young mother and child out of the Infiniti. Others worked to open the Odyssey’s trunk to free the driver, who was trapped with the vehicle resting on the driver’s side.

The three occupants of the Infiniti and the sole occupant of the Odyssey escaped the crash without major injuries, although some passengers received private transport to the hospital.

Capt. Danny Barron said the driver of the Odyssey was attempting to turn into the northbound lane of the highway from Cook-Out, despite signage at the restaurant’s exit that instructs drivers to turn right.

“Luckily, the driver had her seat belt on,” Barron said. “There were no major injuries in the crash. The seat belt really probably saved her from having serious injuries. Her vehicle rolled over and the only reason she escaped without any major injuries is because she was wearing her seatbelt. Something as simple as pulling out of a parking lot can become serious.”

Barron said that drivers should always be extremely careful about crossing the highway during the workday.

“Pay close attention to the signs and follow the rules; those signs are out there for your safety,” Barron said. “To cross, you have to watch the two lanes, the median and the opposite two lanes that you’re trying to merge into. It’s a lot for even the most experienced driver.”

The Troy Belles bats fell silent in a 7-0 loss to Mississippi on Monday evening in Alexandria, Louisiana. The loss... read more