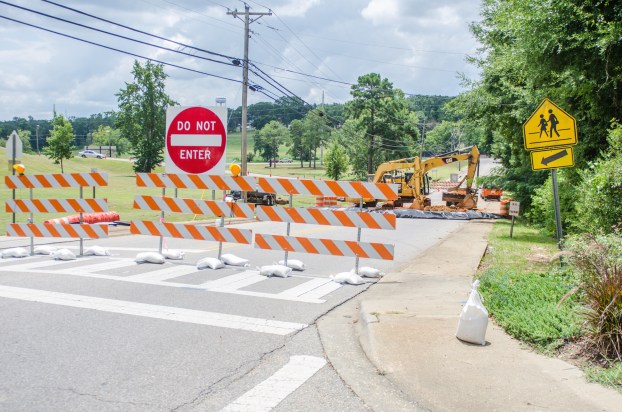 Construction crews arrived at Gibbs Street Monday morning to begin emergency repairs to the roadway. But after beginning work, even worse issues were discovered.

“A couple of weeks ago, I was contacted by Vaughn Daniels (director of environmental services) about an ongoing situation on the road adjacent to middle school,” said Buck Watkins of Watkins Engineering. “A hole was found in the pavement. When we investigated, we identified two voids under the pavement and came up with a plan to repair the undersized pipe in place.”

But Monday they found that there were more issues then they had realized – they discovered a hole in the pipe that had created a void under the road. “It could have lead to an emergency situation if not handled,” Watkins said.

The contractor, S.A. Graham, is already working on repairing the road now, and the council urged for the road to be fixed by the deadline of Aug. 8 to ensure smooth traffic when school begins. Watkins and Daniels said that the project will be completed by the set deadline.

Both Charles Henderson Middle School and Troy Elementary School are on Gibbs Street, with CHMS directly adjacent to the problematic portion of the road.

The issue with the road, Watkins explained, is that the pipe is 18 inches wide and was built to handle runoff when it was installed, but development in the area has become too much for the smaller pipe to handle.

“The water was building up in the pipe and the pressure was forcing it up, creating a dome under the road,” Watkins said.

The cost to fix the pipe will be at least $124,500, which was set to be the cost of the project with S.A. Graham before finding a problem that Watkins said will require some additional cost, although he said it is not expected to be significant.

The council unanimously approved to complete the emergency work and revise the budget to reflect the need for the project’s funding.

While the road is being fixed, Watkins said the Troy Police Department has been helpful in ensuring traffic continues as regularly as possible.

The road is open only to local traffic for access to the adjacent properties along this stretch of Gibbs Street. A two-way detour route will be open for this local traffic utilizing the CHMS driveway. No truck traffic will be allowed on the detour route. All truck traffic must use the Gibbs Street access from U.S. Highway 29 North/Three Notch Street.

Motorists that disregard the “road closed” and “do not enter” signs are subject to a fine.

Motorists are asked to use alternate routes to avoid this area for the duration of this project and to continue to watch for pedestrians and slow-moving vehicles.

Going for three: Post 70 heads to Pelham for state tournament

The American Legion Post 70 19U baseball team is preparing for their pursuit of a third straight state championship. Post... read more