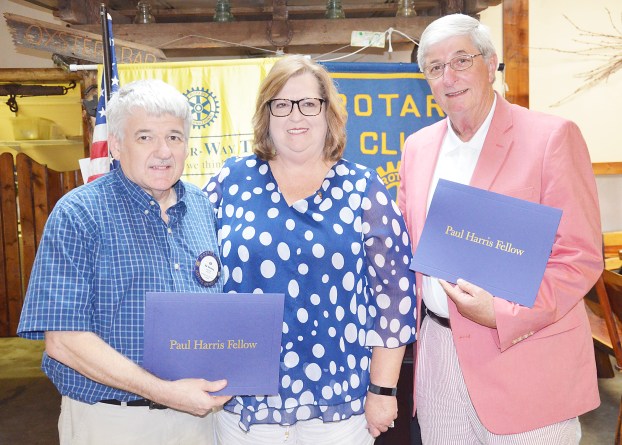 The Brundidge Rotary Club honored two of the city’s citizens as Paul Harris Fellows at the club’s annual banquet Thursday night at the Wagon Wheel Restaurant.

In presenting the Paul Harris award to Thomas, Rotarian Jimmy Ramage said Thomas is a poster child for the award.

“Britt doesn’t have roots in Brundidge but he has a strong love for the community and the people,” Ramage said. “He came to work for the City of Brundidge as the city clerk at age 22 and worked for 12 years before taking a sabbatical to work as the Pike County administrator. He came back to Brundidge led the upgrade of the city’s electrical, wastewater and water systems and has gotten the city pages of grants that have enhanced the quality of life for our citizens.”

Thomas has also been instrumental in the city’s industrial success that includes three food manufacturers and the Walmart DC, Ramage said.

Rotarian Don Dickert presented the Paul Harris Fellow Award to Shirley who visits hospitals, nursing homes, jails and the homebound. As a chaplain, he assists the local hospital and law enforcement.

Shirley’s love of God is evident in that he shares his testimony though his many talents. “Rev. Ed shares his faith through his stories and his music everywhere he goes,” Dickert said. “He graduated from Troy State in broadcast journalism and worked in that field before coming to the ministry.”

Dickert said Shirley is a gifted speaker and musician and uses his talents for the good of others.

Shirley portrays a variety of characters, including biblical figures, the writers of the best-loved hymns and fictional characters. He is always willing to share his talents for the betterment of others.

“When I became president, I was quite nervous but we have the best Rotary Club anywhere and I really had no reason to be nervous,” Shehane said.

Shehane said the Brundidge Rotarians have a heart for service.

and that is evident in their commitment to community.

“Our club participates in the Adopt-A-Mile program and picks up trash on Veterans’ Boulevard every Saturday,” Shehane said. “We ring the bell for the Salvation Army, send two young people to Rotary’s Youth Leadership Award, and support Camp ASCCA.”

Shehane said the club will sponsor an Interact Club at Pike County High School beginning in the fall.

Graham said over the years, the club has awarded more than $120,000 in scholarship funding.

In recognizing the club’s leadership team for the coming year, Shehane expressed appreciation to the club for its support and passed the gavel to Buriece Gracey, who accepted the position with the assurance of the club’s support. She pledged to do her best in leading the club to another successful year of “service above self.”

Ready for state: Local teams gearing up for tournaments

The Fourth of July holiday is just four days away and baseball and softball take center stage as the state... read more