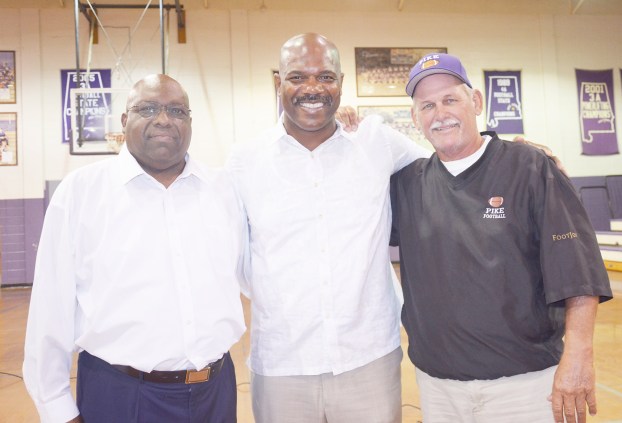 Pike County High School former coaches Wayne Grant and Major Lane were the honored guests at the Celebration of Champions held in Brundidge Friday and Saturday.

Grant and Lane are members of the prestigious Alabama High School Athletic Association’s Hall of Fame and deserved to be honored in the city where they coached, said Fred Baxter, who initiated and organized the weekend activities.

Baxter was a standout player for the 1988 PCHS football state champions. He signed a football scholarship with Auburn University and played 11 seasons in the National Football League.

He understands the challenges and commitments that are necessary to build championship programs.
“The state has recognized what Coach Grant and Coach Lane accomplished with their programs; Brundidge should recognize them, too,” Baxter said.

The Celebration of Champions got underway Friday night with a fellowship event at Collier’s on Main.

Chip Wallace, who was the Voice of the Bulldogs during the Dawgs’ five state championship dynasty, said a large gathering of Bulldogs, coaches and fans enjoyed reminiscing about the gridiron glory days.

“There was a lot of discussion as to which was the best of the five teams,” Wallace said. “But Coach Grant said they were all outstanding teams, but different. He couldn’t single one out because they played in different times and against different opponents.”

Neither could Wallace pick one over the others. However, he did mention the 2005 team that went 15-0 and was the only one of the five to go undefeated on its championship run.

“Trailing 6-2 late in the state championship game, the Bulldogs intercepted a pass and ran it back for a TD and held on to defeat undefeated Cherokee County 10-6,” Wallace said. “The 1989 game was just as exciting. The Bulldogs had to stop a two-point conversion to beat Colbert County 20-19.”

The Celebration of Champions continued Saturday afternoon at the PCHS gymnasium with the recognition of the honorees and remarks by representatives from each of the championship basketball and football teams.

Baxter thanked Grant and Lane for the positive impact they have had on his life and the lives of so many others, not just the young men they coached, but all of those who were a part of each team, from the assistant coaches to the water boys.

He especially recognized Wallace for the role he played and Rev. Bob Sandifer who was the team chaplain.

“The lessons we learned were valuable life lessons,” Baxter said. “Our standards were set high. We learned about hard work and responsibility and to always give our best. We learned what it takes to be a winner and it takes a lot.”

Lane, a member of the AHSAA Hall of Fame, was an outstanding coach, a leader and mentor of young men and an inspiration to his teams, Baxter said.

Lane came to Brundidge in 1987 and he came to win but, even more importantly, he came to mold young men.

“Our teams were well disciplined,” Lane said. “We practiced hard and we played hard. We actually practiced harder than we played because, if the players could endure practice, then the game on Friday night was a piece of cake.”

“If they worked that hard, how could we do anything less,” Lane said. “Our players learned about hard work and sacrifice. They learned that you have to give up something to get something and that, if you believe, you can achieve. God put His hand on us. My goal was for those young men to turn out to be good citizens; that what was most important.”

Grant, who was named coach of the year 10 times, said, too, that his goal was to mold young men into good players and good citizens.

Grant laughing said, not long after he was hired, he and Superintendent Dr. John Key had a slight difference of opinion, at which time, Key told him, if he wanted a job, “go back and go to work.”

To be champions, Grant said players have to believe in themselves.

“At first, nobody believed in us,” he said. “We were like a step child but we believed that we were as good as the guys on the other side of the line. We worked hard and, from then on, the proof was in the pudding.”

Once again, Grant dodges question about which of the five championship teams was the best.

“We’ll never know because they can never play,” he said. “But they were all good and they were each the best team in the state that year.”
Grant did single out the 1988 team as special because their opponents never crossed the 50-yard line until he took out the starting defense.

“The players would get mad because they didn’t want to give up any points, but every little guy wants to play,” he said.

“His vision, his lateral movement, the way he could twist and turn,” Grant said. “Yeah, probably Steven. And, Fred (Baxter) was a great tight end and Chris Nickson, at quarterback. There were a lot of great players. We didn’t want to be average. We wouldn’t settle for that.”
Grant said the Bulldogs eventually got too good for their own good. They had to play teams in the high classifications because nobody in their class wanted to play them.

“We made it hard on ourselves because we were winners,” he said. “But, if I could have played my 14 against anybody’s 14, we would have beaten them every time.”
Chris Nickson said the attitude of those who played for Grant was “before we stepped on the field, we knew we were champions and we played like we knew it.”

The Troy Ponytails advanced in the District 6 West Tournament after they knocked off Greenville 10-3 on Monday night in... read more