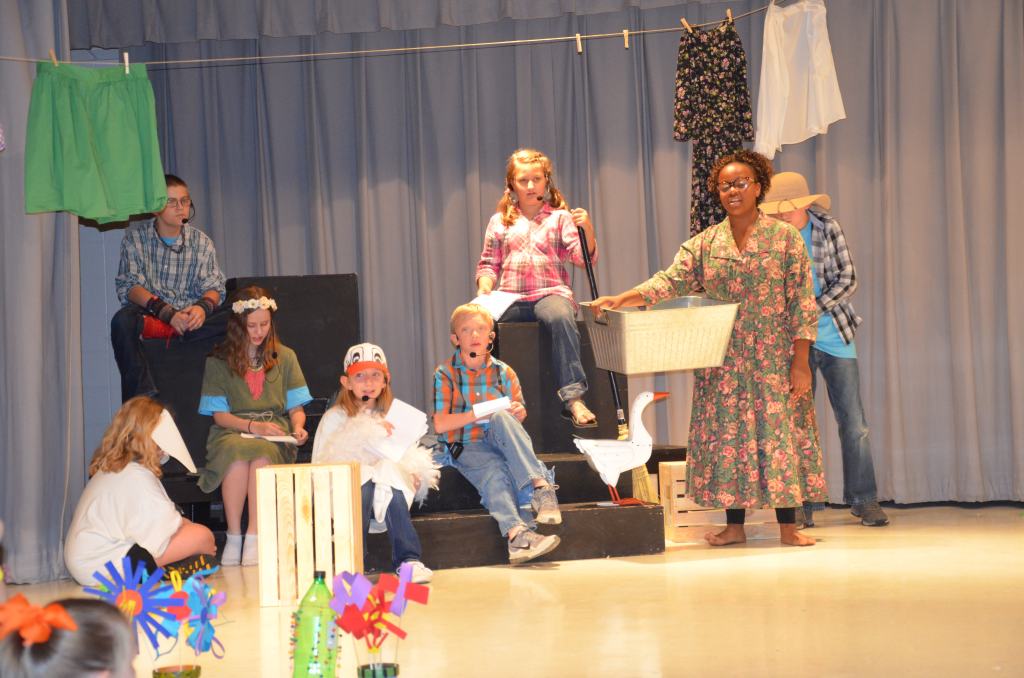 Young performers at the Pike County High School summer arts camp perform “Jack and the Beanstalk” Friday night, thanks to a $20,000 grant from the Alabama Department of Education to make the camp possible. Theater instructor Hannah Clifford said the students were nervous, but performed well for the first play of the camp.

“Once upon a time, there was a boy named Jack who lived with his poor widowed mother. …” That’s the way  “Jack and the Beanstalk” begins but Friday night the students at the Summer Arts Camp at Pike County High School put a different twist on the English fairy tale.

Hannah Clifford, theater instructor at the PCHS Arts Academy, said the summer arts camp was the academy’s first and she was pleased with the participation of the students and the support of their parents.

“We received a $20,000 arts grant from the State Department of Education that made the arts camp possible,” Clifford said. “The concentrations for the camp were theater, art and music. The grant funds were used to purchase sound equipment and materials for the interactive learning program. Funds from the grant were also used to provide scholarships to Troy University’s Summer Spotlight camp last summer. One of the scholarship recipients was an assistant at our summer arts camp.”

The Arts Academy’s Summer Arts Camp was designed to interest elementary students in the arts and to introduce them to the opportunities available at the high school.

“Because the arts camp was a new venture, we wanted to start small and grow,” Clifford said. “We had 13 students and they were involved in art and music activities as well as theater. Of course, they learned the storyline and brought it to the stage. Their art projects included making paper mache props – flowers and gold eggs. They made musical instruments called shekeres, which are African drums, and tambourines. They learned and sang songs that were popular children’s songs.”

The arts camp students performed “Jack and the Beanstalk” for an appreciative audience at the PCHS Art Center theater Friday night.

“They were a little nervous at first because, for some of them, it was their first time on stage and before an audience,” Clifford said. “They did a great job and they seemed to enjoy being on stage. I hope the experience will be encouragement to them to continue their interest in the arts as elementary students and on into high school.”

Clifford was the theater instructor at the camp. Carrie McLaney was the art instructor and Jimmy Oliver directed the music and related activities. Amanda Johnson Lewis, a professional actress, was a camp volunteer.