BACK IN THE ZONE: Trojan Zone coming back in historic downtown building 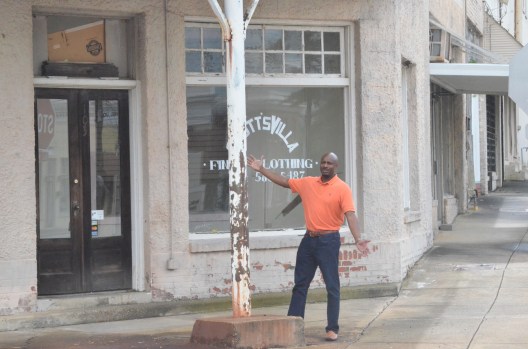 By Jacob Holmes and Tamela Staples

“Trojan Zone was unique; we could host a different variety of people – college students and locals – but we are all Trojan fans,” said Tim Fayson, owner of Trojan Zone. “It’s a place everybody could come and feel comfortable. That’s the unifying thread.”

Fayson started off with nothing but a desire for a place that he and his friends could hang out; it grew into a business that accommodated the community, visitors and the students of Troy University.

In April of 2017, the store abruptly closed its doors at its location on U.S. Highway 231, a building that was being leased out at the time. Cook-Out offered to buy the property and the building’s owner asked Fayson and the Trojan Zone team to move out.

“It was a great partnership, but they made him an offer he couldn’t resist,” Fayson said. We only had 20 days to get out of the building. It was sad to see it go, but it opened up a new opportunity for us.”

So Trojan Zone prepared for the sudden halt to business and Fayson began looking immediately for where the restaurant could come back.

They found a new location in the historic Troy Maid Bakery building on the corner of Elm and Church streets.

“When I was growing up, it was the old bakery,” Fayson said. “My friends and I would stop by there just about every morning to get some donut holes and lemon-filled donuts on the way to school –It’s a ‘taking you back’ kind of moment to me, and just having the opportunity to actually buy it, it felt right … It holds a lot of memories for people my age and older.”

Fayson actually purchased the whole corner, which includes six buildings. He said he is still working on exactly how he is going to use each of the buildings. Some of it, including the prominent historic corner building will be the restaurant, while some of the other spaces may be turned into retail locations.

Fayson said he hopes to be open in the new location in the fall, and wants the restaurant to become a destination spot in Troy.

Not only is the restaurant planned to reopen downtown, Fayson also said he wants to consider expanding to some other Troy University locations and offering some different services, including a food truck.

“We want to be able to go to the games and tailgate and go to other different areas,” Fayson said.

Fayson said he also wants to do even more to engage the community once they are back open and operating.

“We were so busy working for the business we never had time to work on the business,” Fayson said. “ Our approach this time is to hire good people and work more on the business … Our son is deaf and we wanted to give him somewhere to work; we employ people with disabilities, that was a way we could give back.”

Also working in the school system, Fayson said he wants to connect to the schools by participating some reading programs or other school activities.

Fayson said the customer support drives him to bring the business back and make it better than ever.

“The support from the people in the community has been the most uplifting thing about it, hearing the stories about what they liked about it what they miss about it … that gets us even more excited.”