FULL OF FIRE: Lewis fueled by passion to serve others 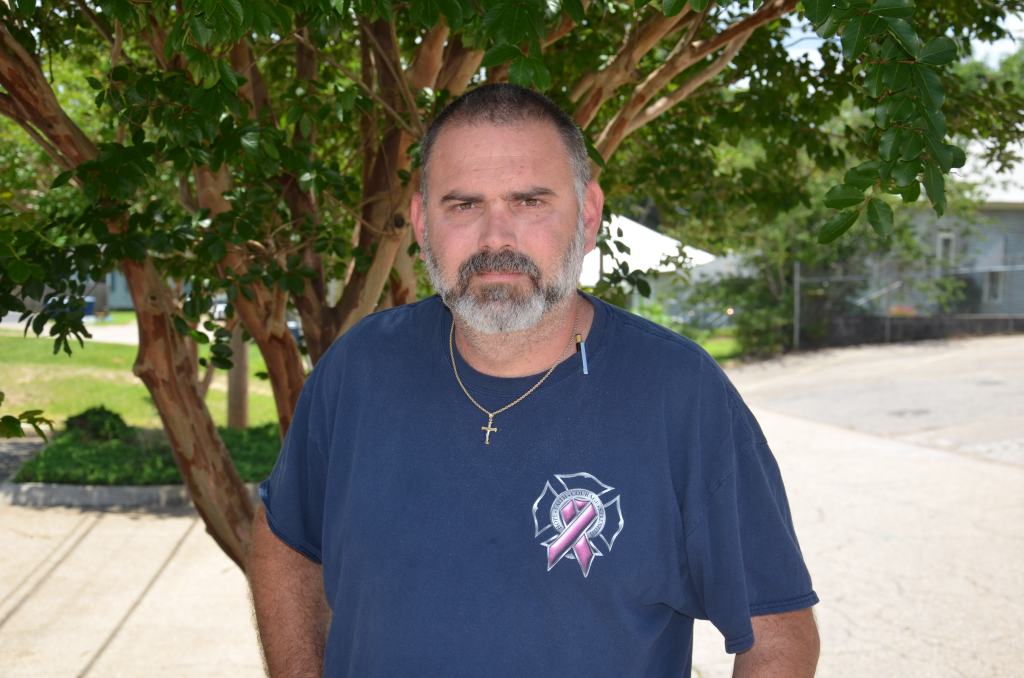 Louis Davis was 10 years old when his house caught fire – embers from a wood-burning heater rising up and inflaming the ceiling late in the night.

Davis vividly remembers that moment, the day he sat and watched his house burn down with his parents and four siblings, with nothing saved but the clothes on their backs, while they waited for help to arrive.

“That is the reason that the Meeksville Fire Department came into existence,” Davis said. “It was already in the talks, but that was the last straw. Troy Fire just couldn’t make it out in time.”

His parents were two of the founding members of that volunteer fire department, and 30 years later, all four of their sons would be volunteering to fight fires with the department.

Davis joined the department in 2006, following behind his brother Cliff who had joined in 2003. Within two years, Louis Davis had become the fire chief of the three-truck department that has 132 square miles of area to cover.

It was the embers of that fire January 5, 1987, that sparked he and his family’s passion to help others, especially in regards to fires.

The memory of the tragedy still haunts him, and propels him to act.

“It’s nothing to ride by a house, even now, that’s burnt to the ground and that’s where your mind goes,” Davis said. “But a lot of good things actually came out of our house burning down – it was a good push that we needed a fire service.”

Davis said every volunteer that works for the department has to be passionate.

“I’m just as passionate about the fire service today as the day I joined,” Davis said. “If you don’t have a heart for it, it will drive you crazy., all the death and destruction.”

Davis said it’s rare to actually get to save a home from burning down – he remembers being able to save four or five in the 12 years he has fought fires with the department, but that’s still the driving force behind working a job every day and then coming out to fight fires for no pay.

“That’s the goal all the time, to go over there and get it saved,” Davis said. “That’s somebody’s stuff –photo albums, pictures – that’s memories. Maybe it’s a blanket that your grandmother has given you that you sleep under every night … It’s something you can’t replace.”

Davis said losing your home – and everything inside it – is something nobody can truly comprehend until they have gone through it themselves.

“I took one of the worst cussings I ever took in my life one night trying to get information from a homeowner,” Davis said. “All she can think about is her house burning down. And I’m telling her ‘I know. I know what you’re going through.’ You don’t understand it until you live it, that’s for sure.”

Davis said it’s still difficult to get to some homes before they’re too far gone to save.

Davis said that unlike the paid fire department in the city, volunteer firefighters are not at the station on call 24/7.

“We might get a call in the middle of the night and have to jump out of bed, get to the station, get the trucks and then go,” Davis said. “It’s going to take us twice as long to get there.”

The situation is further complicated by the sheer size of the coverage area, Davis said. “I would wager to say our coverage area is as big or bigger than any other two departments put together,” he said.

That can cause response times to take too long to get to a fire in time, such as the case of a mobile home that burned down in October 2017 in Needmore.

“People would ask what took us so long,” Davis said. “Well, there ain’t no easy way to get from Meeksville to Needmore quickly.”

The job can also take a toll from the nature of working it and a regular job at the same time.

“The biggest call I can remember doing, I was working night at the time,” Davis said. “I came in about 5 a.m., the radio goes off about 8 a.m. A skidder caught on fire up in China Grove, so me and Cliff ran that call that morning. We get done about lunch time and the truck is running funny so we take it to the shop. We got to the shop and Spring Hill had a structure fire. By the time I got back home, it was time to go back to work again.”

That’s when the pure passion and drive for the job kicks in, Davis said.

“It all depends on your passion,” Davis said. “If you’re not passionate about this job, you’re not going to do it right.”

Davis’ passion was put on hold this March when he was diagnosed with cancer, causing him to have to step down as fire chief and leave his job. He is currently undergoing chemotherapy and says he is itching to get back to serving in the fire department.

“You have no idea how much it hurts to sit here and have to let somebody else do this, having to sit and listen to the radio go off and know you can’t go help anybody else,” Davis said. “I’m not used to having to sit back and accept help. It’s not my nature to accept all this stuff. Our parents brought us up that if you see somebody that needs help, you go help them.”

Which is exactly why, Cliff Davis said, that he and his brother Tracy are going to be holding a benefit ride June 9 to help Louis while he undergoes treatment.

“He was the first to say he didn’t want to be the center of attention,” Cliff Davis said. “He’d much rather be helping somebody than getting help. I told him ‘Suck it up, buttercup.’”

The registration fee is $15 per driver and $5 per additional rider, and any vehicle is welcome in the ride. “Anything that’s street legal and you want to ride it, bring it,” said Tracy Davis.

The ride will begin at about 10 a.m. with registration at 9 a.m. at Harmony Park. The ride will hit the volunteer fire departments in Goshen, Spring Hill, Brundidge and Saco before finishing back up at Harmony Park, where a silent auction and barbecue will also be held to benefit Louis Davis.

“We’re not trying to make a killing,” Cliff Davis said. “We’re just trying to help him out later on. He hasn’t been able to work for a few months now. This will help pay for unexpected bills and keep the lights on. The way I look at it, if we can help you out doing something like this, that’s what God wants us to do. Be kind to everybody; that’s what the world need’s in my opinion.