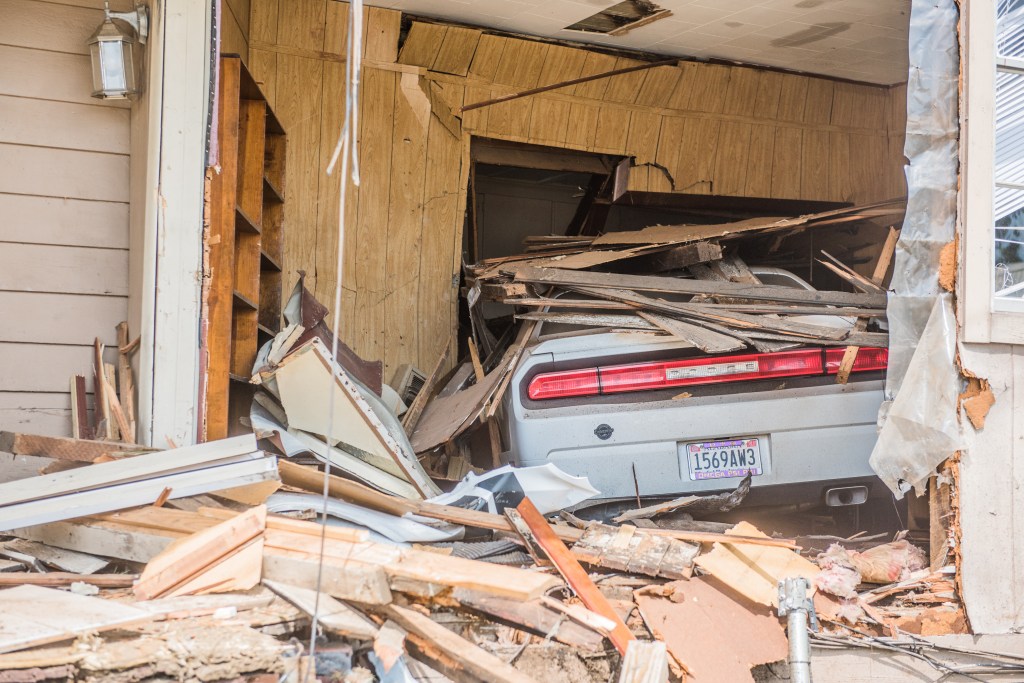 “We haven’t seen anything quite like this before,” said Byron R. Watley, co-owner of Byron’s Paint and Body, as he and his crew sat contemplating how to remove the 2013 Dodge Challenger that had crashed through a residence in the 1000 block of North Three Notch Street Thursday afternoon.

Neither had Lawrence Adams of David Adams Realty, which manages renting out the property for Fair Sky Properties.

“We cover a lot of real estate,” Adams said. “But I can’t remember seeing anything like this.”

The driver of the vehicle, 24-year-old DeQuante Shockley, reportedly had a seizure while driving down the busy corridor Thursday at approximately 2:40 p.m. The medical episode caused him to careen off the road and plow straight into the apartment’s living space.

Adams said that no tenant was currently renting that particular apartment space at the time, fortunately, and the four adjoining apartments were apparently all vacant when the crash occurred.

Shirley Triplett, co-owner of Fair Sky Properties, said the inside of the apartment had been newly redone recently.

“I was supposed to bring in a new refrigerator this morning, but it didn’t work out,” she said.

Zona Shockley, the mother of the driver, said she got a call from her coworker that her son had been involved in a wreck.

“My mind was racing,” she said. “I didn’t know he had a seizure at that point or that he ran into a house – I just knew he had been in an accident.”

The car’s path could be traced along the parking lot of Crowe’s restaurant, over and through a curb leading up to the building and then straight through a porch column and the sidewall of the house into the living room, where it rested covered in debris.

Zona Shockley said she was just happy to know her son was alive.

DeQuante Shockley was transported by private vehicle to Troy Regional Medical Center to be evaluated, but officials said he was responsive and appeared to be unscathed in the incident.

“I think we’re very fortunate,” said Police Chief Randall Barr. “The Good Lord smiled on us – the driver and the folks that live there in the residence. He is fortunate he went into it and there was no structural collapse when he hit that wall.”

Adams said the tenants of the property will be temporarily relocated to other apartments while the building is inspected to see what the building needs to be restored – if it can be.

Coming in hot: Trojan offense clicking on all cylinders…