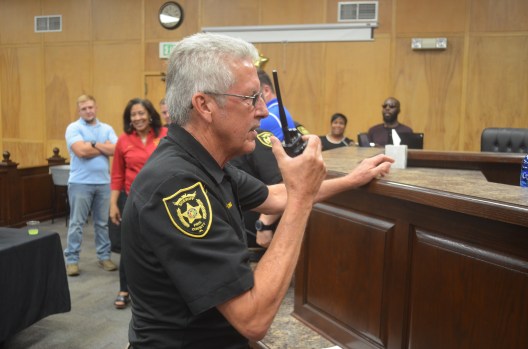 Jimmy Simmons, animal control officer with the Pike County Sheriff’s Office, gives his final call of “10-42” or “off duty” over his police radio Tuesday afternoon at his retirement ceremony. Simmons served with the office for 17 years before wrapping up his law enforcement career Tuesday. 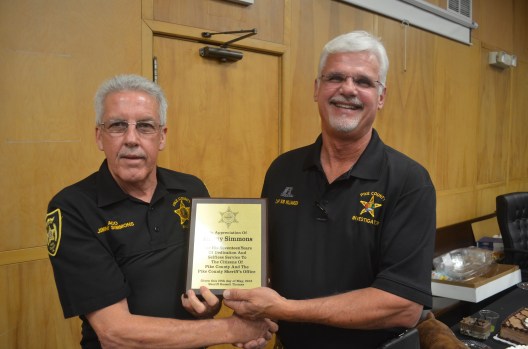 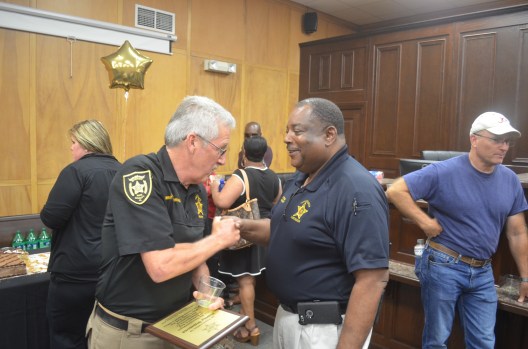 Jimmy Simmons has done a little bit of everything in the Pike County Sheriff’s Office in his 17 years with the department.

He started out in corrections and has spent his last 11 years as the animal control officer.

In it all, he has been an enthusiastic and respected colleague, said Sheriff Russell Thomas.

“Jimmy will be missed,” Thomas said. “ He was a good employee, an extremely hard worker and very loyal. He wore many hats. He was the animal control officer and also the solid waste enforcement officer, a transport officer – he was used in a lot of different areas. He brought a lot of energy to work every day and took his job very seriously. He was well-respected by the public; you could always count on Jimmy to do the right thing.”

Simmons said he is excited to start a new chapter of his life after his long time serving in the office.

Simmons said he will miss his colleagues at the department, although he won’t be far.

“There’s a lot of good people,” Simmons said. “They’ve been good to me. I’ll still be stopping by to chit chat.”

As for the animal control, Simmons said the sheriff’s department will have someone else that can take over and do that job.

Simmons was presented with a plaque for his service during his retirement ceremony at the Pike County Courthouse Tuesday. He also gave his final “10-42” call on the police radio – code for “off duty.” The dispatcher responded and let every officer know Simmons had indeed given his final call and thanked him for his service.