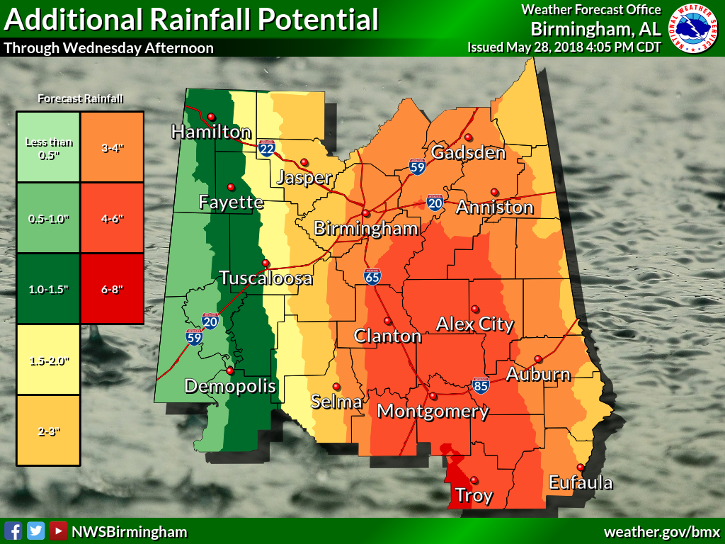 Interim EMA Director Herbert Reeves said there have been few issues in Pike County so far – there was one report of a tree down across a roadway.

Other than that, the rain has only just begun to pour out what officials projected could be four or more inches of rainfall locally.

National Weather Service meteorologist Jason Holmes said the majority of the impact for Pike County will come later in the night into the early morning hours, with the threat lessening as the eye moves north into Central Alabama.

“The worst weather is going to be (Monday) afternoon and evening into (Tuesday) morning,” Holmes said. “ …  Thankfully some dry air has worked its way around the system, which will keep it more compact. There’s not a lot right now on the southern side of the system; really the heaviest activity on the north and slightly northwest side of that. That center will broaden out with time and it will lose that tight structure there and become more and more diffused with time.”

Gov. Kay Ivey declared a state of Emergency beginning at 6 a.m. Monday as a precaution to ensure emergency services can function efficiently should they be needed.

A few brief tornadoes are possible in much of Florida and parts of Georgia, South Carolina and Alabama. But forecasters said flash flooding from heavy rain was the biggest risk in many areas.

The National Hurricane Center in Miami said at 2 p.m. EDT Monday that Alberto was centered about 30 miles (50 kilometers) south-southwest of Panama City, Florida. The storm was expected to make landfall later Monday.

The storm had maximum sustained winds of 50 mph (85 kph) and was moving north at 8 mph (13 kph). However, once Alberto is inland and deprived of the warm waters that fuel tropical weather systems, the storm was expected to steadily weaken. A subtropical storm like Alberto has a less defined and cooler center than a tropical storm, and its strongest winds are found farther from its center. Subtropical storms can develop into tropical storms, which in turn can strengthen into hurricanes.

Rough conditions were roiling the seas off the eastern and northern Gulf Coast region, and officials warned swimmers to stay out of the water through Tuesday due to life-threatening swells and rip currents.

Between four and eight inches of rain could pummel the Florida Panhandle, eastern and central Alabama, and western Georgia. Isolated deluges of 12 inches are possible.

Reeves said residents should be able to have a better idea of any damage done in the area as they begin to wake up Tuesday and survey everything in the light.

He said emergency services will be working hard overnight to clear what they can, but may have to wait until morning in some situations to ensure their safety.