FNB Board Chair Honored for 50 years of service 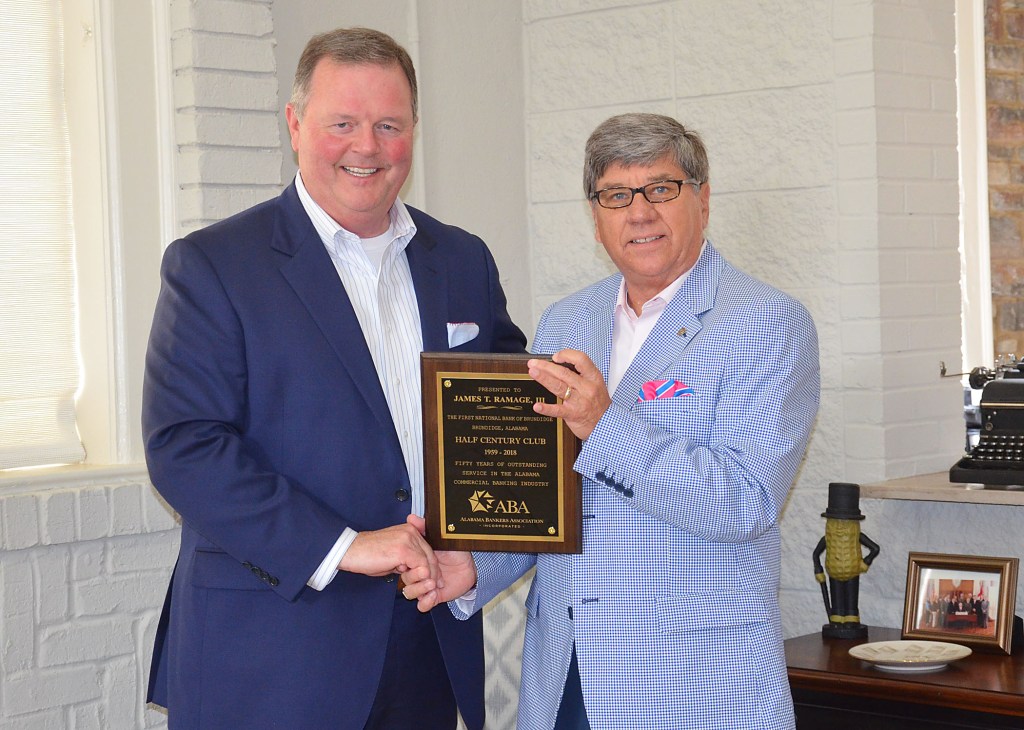 Scott E. Latham, president and CEO of the Alabama Bankers Association, left, welcomed Jimmy Ramage, board chair of First National Bank of Brundidge, into the association’s Half Century Club. Latham congratulated Ramage on 50 years of outstanding service to the Alabama Commercial Banking Industry.

Ramage, the chairman of the First National Bank of Brundidge Board of Directors, was welcomed into the Alabama Bankers Association’s Half Century Club by Scott E. Latham, president and CEO of the association.

“Dad held that office from 1959 until 1964, then he took a four year vacation at the University of Alabama,” Ramage said. “Then, he came home to Brundidge and has been at the bank since.”

Latham congratulated Ramage on his 50-year service to the Alabama Commercial Banking Industry.

“Jimmy has a great interest in banking, in its history and its heritage,” Latham said. “He understands banking and its role in the community.”

Ramage has served on the Alabama Bankers Association board and as its chairman.

“He has given back to the association in so many ways and we greatly appreciate his commitment and his contributions.”

“Jimmy understands that banking is not about buildings, not about walls. It’s about people – about the heartbeat of the people he serves.”

“Jimmy leads by influence, in the bank and in the community,” Latham said. “He loves Brundidge and has been a longtime community leader and community servant.”

Latham said Ramage is notable in three areas – as a family man, as a standup leader in the banking industry, in both good times and in challenging times, and as leader in his community.

In celebrating Ramage’s half-century of service to the Alabama Commercial Banking Industry, Latham said, it is just as important to celebrate his love of and commitment to his family and his dedication to the Brundidge community.

Ramage was welcomed into the Alabama Bankers Association Half Century Club by members of the First National Bank’s board of directors and family members, his wife, Johnnie, his son and daughter-in-law John and Missy, and thee granddaughters.

Ramage expressed appreciation for the recognition.

“Fifty years was not anything I ever really thought about,” he said. “That’s a long time and, when you’re 20 years old, you don’t even think that way. But, when I got back to the bank (Thursday) and looked at the 50-year plaque and the 40-year plaque from the city and the 38-year plaque from Power South, I thought, ‘Man, you are old.’”

On a serious note, Ramage said he has been blessed to do work that he enjoys, to live in a community where people care about each other and to have a wonderful family.

“Life gives us turns and twists but I’m proud to have grown up in Brundidge,” he said. “I wouldn’t trade that for anything.

“When I was working nights as a trashateer, janitor, at First National, Hatcher Jackson was cleaning up at Brundidge Banking Company; Bobby Roberson was cleaning up Dykes’ Drug Store; John Phillip Johnston was cleaning Hamrick’s Drug Store; and sometimes Byron Belcher would be cleaning the City Market. We were the night cleaning crew. We all had a good time. Those are great memories. I wish all kids could have memories like that.”