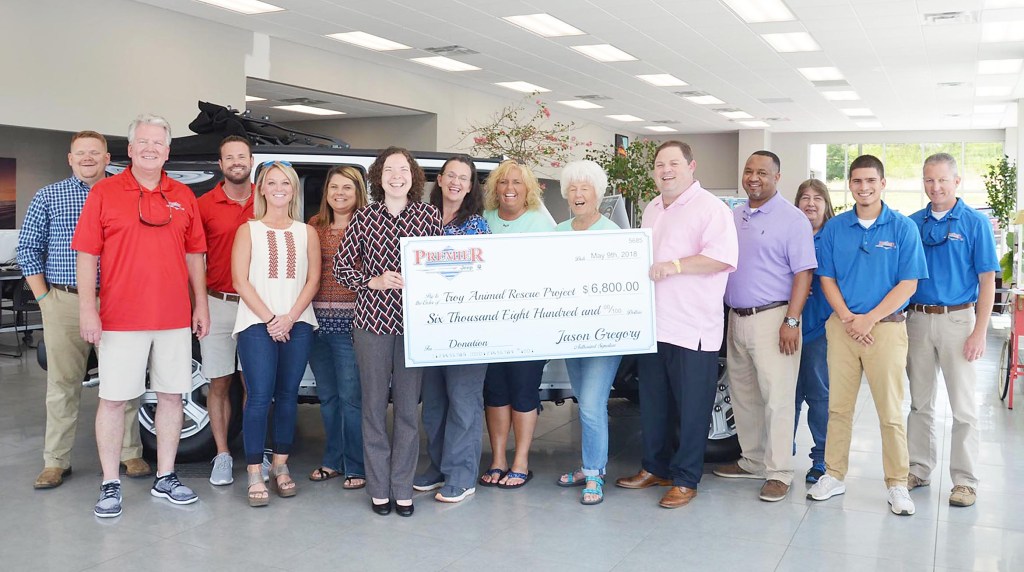 Jason Gregory, owner and general manager of the Troy Premier Chrysler Dodge Jeep Ram dealership, right, presented a check in the amount of $6,800 to the Troy Animal Rescue Project. Accepting for TARP were, Tiffany Howington, Melissa Boatner, Lynn Hughes and Jimmie Hiffman. Not pictured, Shelby Hughes. The TARP group expressed appreciation to Gregory and the Premier employees for the generous donation and their support of TARP.

So, when he learned about the plight of homeless animals in Pike County and the efforts of the Troy Animal Rescue Project (TARP) to rescue and find homes for these animals, he saw an opportunity.

“I wanted to be a good community partner and I love animals,” Gregory said. “I have a heart for them.”

Gregory said the more he heard about the large number of abandoned, abused and neglected animals in Pike County, the more he realized that he want to do something. What, he wasn’t sure until he heard about TARP and what that group is doing to rescue these animals and find foster and forever homes for them.

TARP opened with one kennel and now has more than 250 animals on site and that includes more than dogs and cats. Wildlife has been accepted.

“I saw TARP as a way to be a part of something good in the community,” Gregory said. So, he contacted Tiffany Howington and TARP.

“I was excited about what Jason offered to do and so appreciative,” Howington said. “Caring for animals until we can find homes for them, costs money and he was offering to help, financially.”

What Gregory pledged to do was to make a $100 donation to TARP for every vehicle sold in the month of April.

The TARP volunteers had no thought of what that might mean in support of the rescue project. Then, the check was unveiled – $6,800 dollars!

Howington said it was more than ever imagined and there are no words to adequately express what those dollars will mean to TARP and the many animals that it will “rescue.”

“We thank Jason Gregory, Troy Premier Chrysler Dodge Jeep Ram dealership and all the employees for their support and this very generous donation,” Howington said. “We can’t say thank you enough. Thank you from all of us at TARP and all the animals this donation will help.”