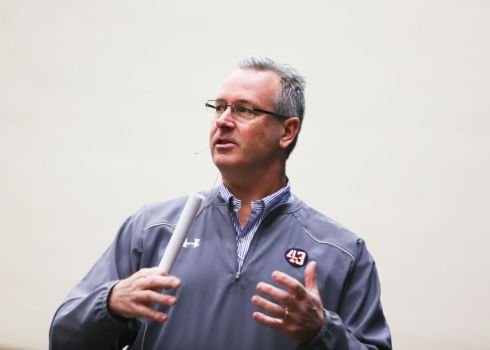 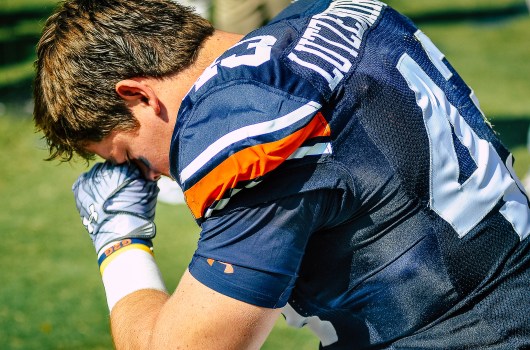 submitted PhotoMike Lutzenkirchen, father of the late Philip Lutzenkirchen, will address student-athletes being honored at the annual J.O. Tip Colley awards banquet at the Troy Recreation Center on Monday night.

His last name became a household word among college football fans in 2010. He was revered and adored by Auburn faithful and deeply respected by opponents. He had a smile, presence and heart larger than his 6-foot-4, 258 pound frame, and then suddenly, he was gone.

Trailing Alabama 24-7 at halftime of the Iron Bowl in 2010, Cam Newton and Auburn stormed from behind, with Philip Lutzenkirchen hauling in a 7-yard touchdown pass, then doing a spontaneous jig in the end zone which affectionately became known as “The Lutzie.”

Lutzenkirchen and the Tigers won 28-27 and went on to win the National Championship that season, and the Georgia native went on to catch more touchdowns than any tight end ever at Auburn.

Just over one year after graduation, Lutzenkirchen and a friend – two of four passengers in a Chevy Tahoe – were killed in a one vehicle accident involving alcohol.

This Monday evening at the Troy Recreation Center, Philip’s father Mike will address student-athletes being honored at the annual J.O. Tip Colley awards banquet about the purpose of the Lutzie 43 Foundation – Live, Love, Learn.

“Everything we do on a daily basis is trying to figure out how we can use my son’s life to impact other kids so that their parents don’t find themselves in a situation, due to a poor decision, because they are mourning the death of a child,” said Mike Lutzenkirchen, Philip’s father and founder of the foundation.

Mike has made over 300 talks in nearly four years to groups of high school student-athletes, businesses, everyone that continues to invite him to tell his story, the story of his son, and how making good decisions is imperative.

Today, the foundation presents ten $4,300 scholarships per year to deserving students, and the Lutzie 43 Foundation continues to grow. The greatest benefit, according to Mike, is the lives he believes are being changed.

“You can look in the kids eyes that are high school age, and college athletes or college students in the greek system, and also look at adults, and know that they are understanding in the message,” said Mike. “I am very confident that from the message I deliver, and how candid it is, and that it also does not pull anything back from the mistakes Philip made, I know that in my heart that we are making an impact.

“The foundation is strong, but where we need help is people understanding that we have this wonderful character development curriculum. It is a 43 day program, and the kids that go through it have an opportunity to submit their application for consideration for a $4,300 scholarship. That’s where we need help in people knowing this exists, and how we can make an impact through this cause.”

For Mike, his family strives to honor the positive achievements of Philip.

“I have been blessed to have been married 32 years to my wife Mary, and have known her since second grade,” said Mike. “We have three beautiful daughters. We have created the foundation really try to impact kids ages initially ages 12 to 22, and their decision-making and let them know that it is okay to stand up to peer pressure. If they can act more like Philip and be like Philip, in how he treated people and how he used his platform to serve others, how he just made people feel like they were the most important people in the room, but certainly learn from the mistakes that took his life that inevitable weekend. That’s what the foundation is all about.”

It was just recently at a golf tournament in Sylacauga that Mike awoke with peace in many regards.

“I woke up that morning at the golf event with peace on my heart knowing this is supposed to be a celebration of who he was, and what he was, who he impacted, even though he is not on earth, but through the foundation,” said Mike. “I don’t know why, but it is the first time I used the phrase, “I don’t have a hole in my heart any more.” I have a closed heart, but there are certainly elements every single day that causes a crack to appear, but the crack closes pretty quickly. Time heals a lot.

“I firmly believe no one truly knows what God’s will is for all of us. Through this whole journey not one single time have I asked God, why? I am content in my heart that God felt that Philip delivered all that he could on earth, and it was time for him to take the next step and come home and deliver to people that remain on earth.”

Anyone interested in attending the event, which begins at 6:30 p.m. Monday, can purchase a ticket at the door for $10.