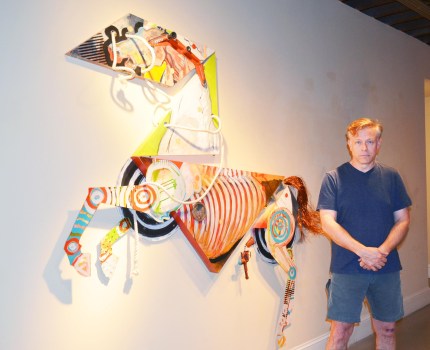 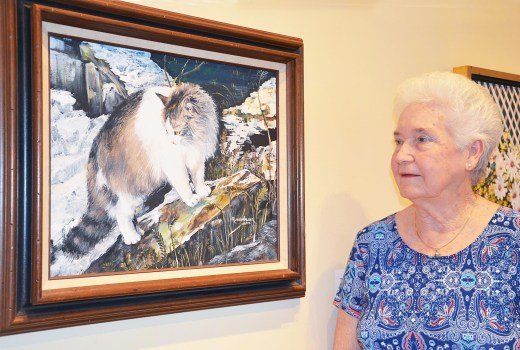 The Johnson Center for the Arts will honor hometown artists, Ruth Walker and Greg Skaggs, with an opening exhibition reception from 6 until 8 p.m. Thursday.

The dual exhibition will feature Walker’s “Creative Expressions of Life” and Skaggs’ “1969.”

The public is invited to view the exhibitions and visit with the artists as they share their passion for their work and the “behind the scenes” stories of their artwork.

“I’m blown away by these two artists,” said Wiley White, JCA exhibition coordinator. “Their styles are so different; their subjects are so different and they are both so good,” White said. “When I look at Ruth’s exhibit in the upper galleries, I’m amazed. Then, when I go to the lower level galleries, I’m just as amazed by Greg’s work. They are outstanding and they are Troy artists. We are excited and honored to show their work.”
The “different as night and day” exhibitions cannot be viewed without reactions.

Walker’s expressions of the things that she holds dear and Skagg’s journey back to childhood will resonate with most all viewers.

“Everything I paint has life,” Walker said. “People, plants, animals. Life is precious. My paintings are creative expressions of life.”
Walker said she has never wanted to do anything other than “draw and paint.”

“When I was eight years old, I sent a drawing to a correspondence art school,” she said. “I got a letter back saying I was too young for the school but I had talent. To try back later.”

After Walker married, she tried again and was accepted into the art school. She completed the course and has never looked back.

She paints portraits, flowers, animals, landscapes and, what she calls, mind paintings.
“Sometimes, I think, ‘where would it be nice to be’ and that’s what I paint,” Walker said.

Walker also paints homesteads and buildings with a history or a special purpose. Although, buildings are inanimate, they have lives of their own through the people who inhabit them.

White said Walker brings life to anything she paints, whether it’s the Kilby Hall lab school that was once a centerpiece on the Troy University campus or Fluffy, her playful, lovable cat that she adores.

“You can’t not love what Ruth does,” she said. Nor, can viewers not be captivated by the ‘playful’ art of Greg Skaggs.

“Playful” is a word that Skaggs uses to describe his “1969” exhibition.”

“That’s the year I was born –1969,” he said. “My dad was in the Marine Corps and I was fascinated by what soldiers wore, about guns and everything ‘army.’”

Skaggs was born in Oklahoma. He loved everything about the West. He played with toy guns and plastic soldiers. But he didn’t associate those things with violence. Just playful things.

Skaggs said he always had an interest in drawing. He attended the Oklahoma Art Institute and studied under several highly regarded artists and illustrators.

He developed a fascination for prairie dogs that is evident in his “1969” exhibition.

“The exhibition includes the “Five Tribes of Prairie Dogs,” he said and readily shared the story of a woman in Arizona who actually rescues prairie dogs for much the same reasons that dog are rescued.

“She finds prairie dog holes and actually sucks them out of their holes with a mechanical device and rescues them,” Skaggs said. “However, the playful prairie dogs in his artwork have no need to rescued. They find their ways into the playful hearts of their viewers.

The year 1969, was the year of the lunar landing and of Skaggs’ birth, so naturally, he has an interest in “outer space.” His exhibit includes “astronaut art” and creations from “discards” from the university’s science department.

“Ruth Walker and Greg Skaggs are artists with two different styles and different interests,” White said. “These exhibitions are captivating. Everyone is invited to the reception Thursday night in support of two of our outstanding local artists.”

The exhibits will run though July 7.

JCA hours are 10 a.m. until 5 p.m. Wednesday though Friday and until 3 p.m. on Saturday. Admission is free.