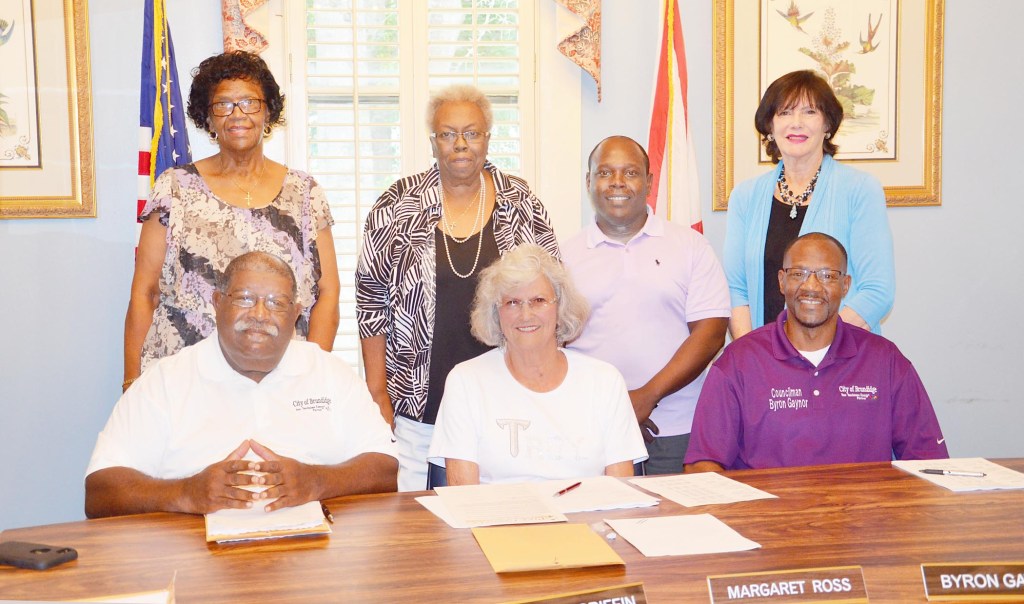 The Brundidge Council proclaimed May "Business Development Month" Tuesday. The council was joined by Chamber of Commerce President Kathleen Sauer for the proclamation.

Prior to its Tuesday meeting, the Brundidge City Council held a public hearing to allow community input on a request for the rezoning of a vacant lot on 6th Avenue.

The request was for the rezoning of the lot from R-3 Multi-Family Residential to B-1 Neighborhood Commercial.

The rezoning request was filed by Anthony Foster, owner of a barbershop on South Main Street. Foster made the request so that he could erect a building on the lot, which he owns, and move his barbershop to that location. Foster said the move would be more cost effective for him than continuing to rent the building where his business is currently located.

Mayor Isabell Boyd said the city’s planning commission did not recommend the rezoning of the property. There was opposition by neighborhood residents and also a question as to adequate parking for the business, she said.

Betty Baxter, council member, District 1, said the responses she has received from the neighbors are in opposition to rezoning the property. They also had questions about adequate parking.

Baxter said those opposing the re-zoning request are elderly and were not able to attend the public hearing but did attend the planning commission meeting to express opposition.

Margaret Ross, council member District 3, said she would like to find a way to keep Foster’s business in the downtown area because it brings people to town.

The council took no action on the rezoning request.

Foster asked that he be allowed to meet with the council at a later date to discuss his business situation. Boyd agreed.

In the council’s regular business, Kathy Sauer, Pike County Chamber of Commerce president, presented a proclamation to the council declaring the month of May, Business Development Month.

Sauer thanked the council for all the work that it does to support and forward economic development in the Brundidge area.

Boyd acknowledged the week of May 13-19 as National Police Week and presented a proclamation to Brundidge Police Officer Justin Davis declaring the week Police Week in Brundidge.

In presenting the proclamation, Boyd expressed appreciation, on behalf of the city and all Brundidge citizens, for the unselfish contributions members of the Brundidge Police Department make to “safeguard our lives.”

“We do appreciate and value your work,” Boyd told Davis. “We thank you for the sacrifices that you and your fellow officers make to keep us safe and for risking your lives to uphold the law. We appreciate you and we salute you.”

The council considered and approved the purchase of a 2012 small bucket truck from the South Alabama Electric Co-op in the amount of $21,000.  The International bucket truck has 210 miles. Britt Thomas, city manager, said a bucket truck is not used often, so, the 2012 truck should meet the needs of the city for the next seven to 10 years.

In other business, the council approved a resolution in support of the Municipal Water Pollution Prevention Program.

Thomas reviewed the FY2018 March financials with the council and reported that the city is on track financially.