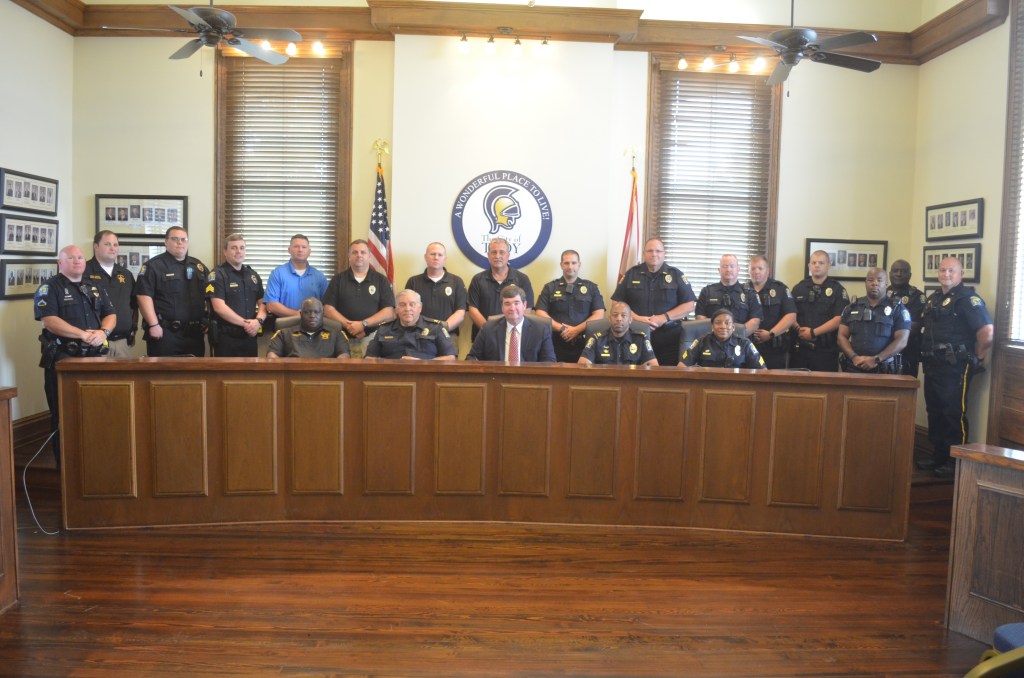 “We appreciate what you all do,” Reeves told the 20 police officers that joined him at City Hall Monday for the proclamation of Police Week. “You run toward danger instead of away from it.”

With a stroke of his pen, Reeves proclaimed this week to be “Police Week” in Troy, coinciding with the national observance honoring law enforcement officers.

“It’s harder now to be a police officer, I think, then it has been in any time,” Reeves said. “I’m grateful that y’all are willing to leave your families and go out and do this job. There’s not a thing I think about more than that everybody goes home.”

“You’ve got to have the right temperament, you’ve got to get through the academy and a large number of hours per year in continuing training,” Thomas said. “In the field, you have to shake it off and move on to the next call and the next problem.”

Troy Police Chief Randall Barr said officers never know what they may face when they go out on a call.

“It is an extremely difficult job, you know; we deal with some things that bring great pleasure and deal with a lot of things that bring extreme pain,” Barr said. “You never know from one call to the next what you’re going to be faced with, but you have to be prepared to face whatever … you have to be prepared you might be in a battle in the blink of an eye. You just never know what that next call may hold or what’s around that next corner.”

Wednesday, the City will hold a special observance for officers that gave their lives in the line of duty in a ceremony next to the monument right outside the police department that memorializes all Troy officers that died in service.

The police memorial ceremony will begin at 10 a.m. in the parking lot of the Troy Police Department.