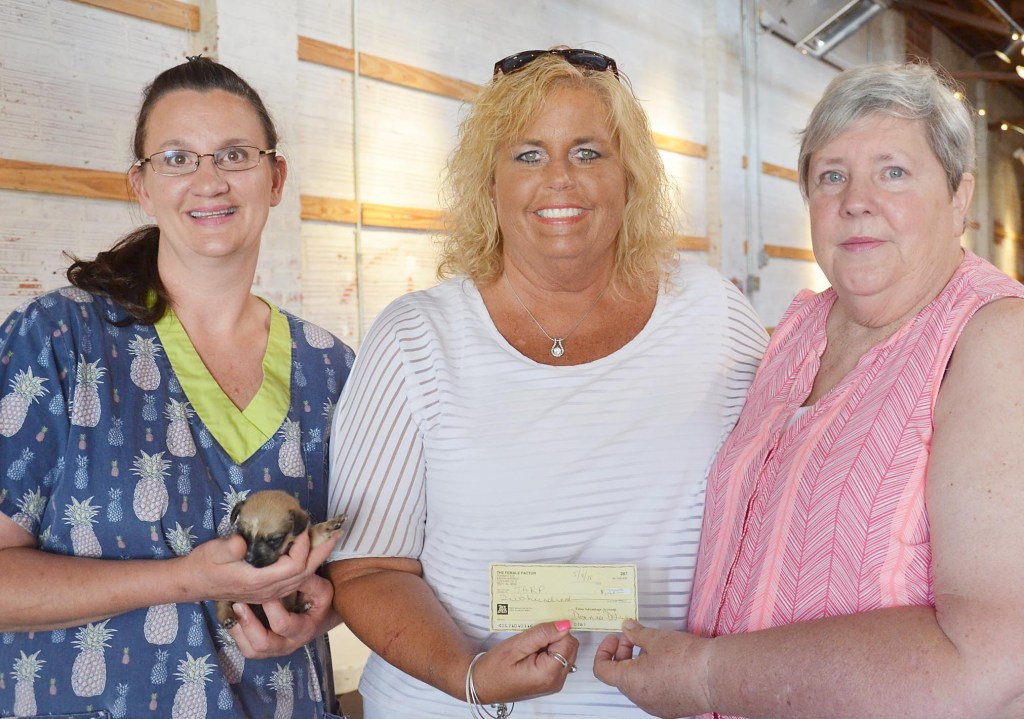 In a few words, a tarpaulin or tarp is a protective covering.

Whether Tiffany Howington had that in mind when she opened a rescue shelter for animals or whether TARP was simply an acronym for Troy Animal Rescue Project, she didn’t say and that’s not important.

What is important is that TARP is a “protective covering” for unwanted animals. And, what is mind-boggling is that TARP has rescued more than 7,000 abused, neglected, abandoned and homeless animals since it opened in March 2014.

Howington, Melissa Boatner and Lynn Hughes were program guests at the Wednesday meeting of Female Factor. They didn’t come empty handed. They brought five bottle-fed Dorkies (Dachshund-Yorkie mix) that were rescued after the mother was killed by a car.

And, if the pups had been 10 weeks old, every one of them could have been adopted on the spot at Female Factor.

But, it’s not always that easy to attract people who are willing and eager to adopt a dog, a cat, a ferret, a pot-bellied pig or a chicken.

TARP opened with one kennel and, now, has more than 250 animals on site.

“We don’t just take dogs and cats,” Howington said. “We take just about any animal that needs a safe place to be, regardless of its age or medical condition. We have accepted wildlife, including raccoons and hummingbirds.”

Last year, alone, TARP had 2,000 animals. Their adoptions are far reaching. TARP recently transported 40 animals to Indiana.
TARP also has a statewide adoption program that includes a home visit, a vet reference and a $50 adoption fee.

All animas adopted through TARP are fully vetted, Howington said. “Our adoption program has been very successful. We also have a foster program that provides homes for the animals until a forever home is found. We have four dogs that we have had for three years. We do not kill animals.”

The large number of on-site animals and also those that are being housed by the TARP core-group is an indication of the commitment they have to what is commonly called the “stray” animal community.

TARP is completely run with public donations. The project does not receive city, county or state funding. The annual cost of running the facility is in the $10,000 range.

“Our volunteers do anything from feeding the animals to sweeping the floor,” she said adding that when TARP receives small animals that sometimes have to be fed every hour. “Children sometimes come with their parents. They enjoy helping and we can always find something for them to do because there is always something to do.”

“These people are doing a great thing,” he said. “When a homeless animal finds a home, that’s like it winning the lottery. It’s amazing all that TARP does. Minnesota must not have dogs because TARP has shipped a load of them up there.”

Hawkins said 25 years ago, the county didn’t have a stray dog or cat problem. Neither was there a problem with putting animals to sleep.

“The city picked stray animals up and, if they were not claimed in seven days, they were put to sleep,” he said.

Hawkins had praise for TARP and other shelter groups that have recognized the “stray” animal problem and have accepted the responsibility for caring for God’s creatures.

Those who would like to support TARP financially may send donations to TARP, P.O. Box 771, Troy, AL 36081. All donations are greatly appreciated.