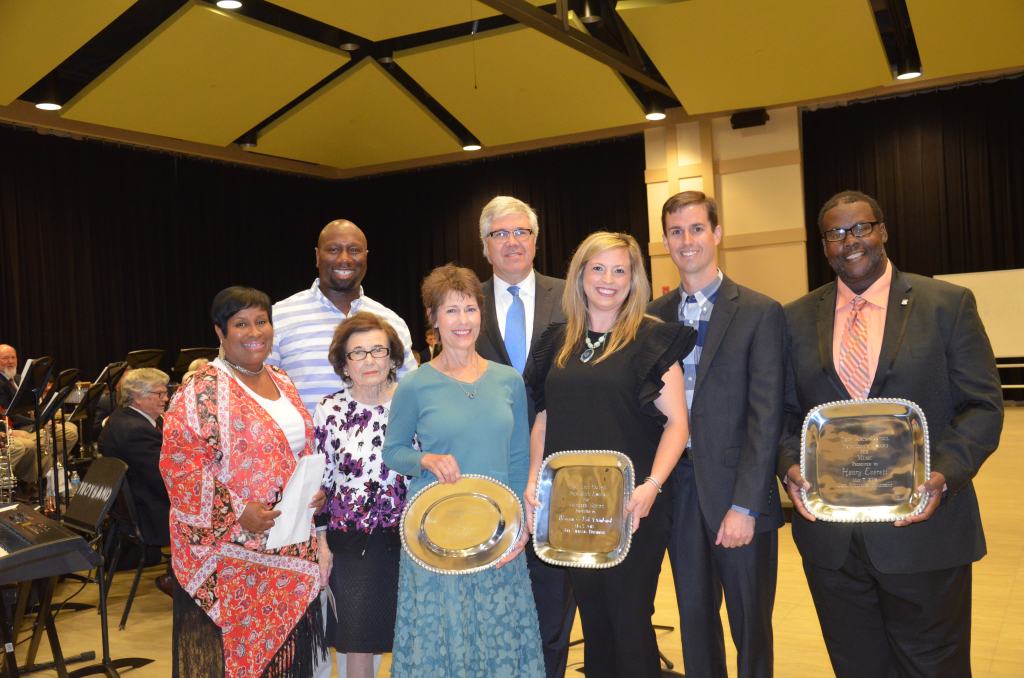 Although expressed in somewhat different ways, “Thanks for the opportunities” was the sentiment expressed by the recipients of the Troy Arts Council’s Presidents’ Awards at the Southeast Alabama Community Band Concert Monday night at Long Hall on the campus of Troy University.

Williams expressed appreciation to the recipients for their dedication to the arts and their commitment to community.

In presenting the awards, Shelia Jackson, a member of TAC board, said Barnes, a graduate of the University of Southern Mississippi, taught art in the Pike County Schools for 10 years and then eight years at Charles Henderson Middle School.

“Since her retirement in 2005, Day has taught private art lesson and after-school art classes at the Johnson Center for the Arts,” Jackson said. “She stays busy with community and church volunteer work and enjoys her pottery time at the Colley Senior Complex.”
Rob Drinkard developed a love of the visual arts at a young age traveling with his grandfather, the late Doug Hawkins, Jackson said. “Watching his grandfather collect art and form relationships with artists instilled in Rob a similar passion. He earned a degree in graphic design at Troy University. He began serving on the TroyFest Art and Craft Festival in 2009, the same year he married Morgan Hopper, who began working with the Johnson Center for the Arts as the media coordinator.’

Morgan Drinkard also wrote grants for art education and secured funding for the arts programming at the JCA. She began serving on the TroyFest committee in 2011. Both are employed at Troy University.

Henry Everette is a self-taught musician who learned to play drums on his daddy’s fishing buckets and later taught himself to play the keyboard and the tuba.

“Although Henry claims to be self-taught, he understands that his musical ability is a gift and, for that, he is forever grateful,” Jackson said. “Henry is a graduate of Troy University has taught music a Banks Primary and Middle School for 12 years. He believes that music is the bridge that helps connect the world’s diversity.”

Williams again expressed his appreciation to the TAC President’s Award recipients for their continuing commitment to the arts and to the TAC’s mission to further the arts in the community.