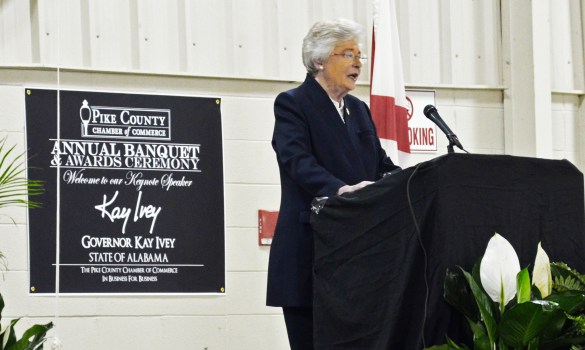 Gov. Kay Ivey delivers the keynote speech at the 2018 Pike County Chamber of Commerce Annual Banquet on Tuesday, May 1, 2018. 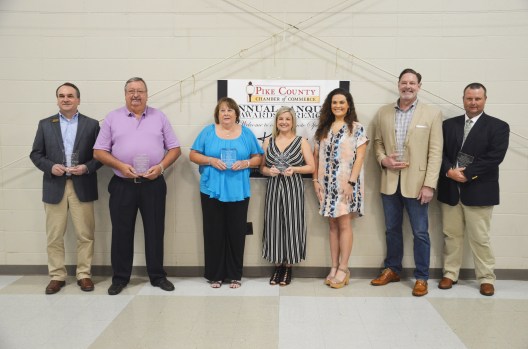 Representatives of the businesses which won excellence awards Tuesday pose for a group photo.

Excellent businesses and students of Pike County were honored Tuesday at the Pike County Chamber of Commerce Annual Banquet.

“I’m proud to work alongside of you to make Alabama an even better place to live, work and raise a family,” Ivey told the crowd at the Pike County Cattleman’s Complex.

Ivey shared some “good news” with the Chamber members as well as her vision for the state moving forward if reelected.

“The economy is on the rise,” Ivey said. “We have reached the lowest unemployment level in recorded history (in Alabama). More people are working and making good money. Companies around the globe are looking at Alabama as a potential place to come and grow.”

That includes some recent major economic development projects in Pike County, Ivey said. The City of Troy last year announced that Conecuh Ridge Distillery will be consolidating its operations in the city, investing at least $13.5 million into the local economy and creating 50 jobs initially.

Then, in January of this year, Troy officials announced the recruitment of Kimber firearms to the city, with the company agreeing to bring over 360 jobs to the city and invest over $38 million.

In March, the Pike County Commission inked a deal with Rex Lumber to bring a state-of-the-art saw mill to the county, bringing a $100 million investment and over 110 jobs.

“I’m proud to be a part of the effort that helps families accomplish their dreams,” Ivey said. “But we can’t reflect too long on our accomplishments; we must move forward with a clear vision.”

Ivey emphasized the importance of education during the speech. “Our goal is really simple; to prepare our people whether finishing high school or college to join the workforce and make a good living.”

Ivey also talked about assisting rural hospitals, in part through a program for the University of Alabama at Birmingham hospital to take on some administrative tasks and costs, and about increasing access to high-speed internet.

She also said changes need to be made to the state ethics commission.

Instead, Ivey suggested shifting the authority to the judicial branch of government, including allowing the chief justice of the Alabama Supreme Court make appointments.

In addition to hosting Ivey, the Chamber named their 2018 Excellence Awards winners, which are given out to businesses from different sectors in the community.

Winning the award for excellent customer service among hospitality, retail and leisure services was Glow.

Woodling Chiropractic was named business of the year in the health and human services sector.

Sanders Lead received the excellence award among member businesses in the manufacturing and industrial category.

The best of the year in professional services according to the Chamber was Southern Animal Hospital.

Troy University Athletics received the honor for their philanthropy work as a nonprofit.

Troy Bank and trust was awarded for having the most excellent customer service of the year.

Finally, the overall business of the year for treatment of customers and impact in the community was Horn Beverage.

In addition to the annual business awards, Chamber officials decided to honor their P.R.A.I.S.E. (Program Recognizing Achievement in Secondary Education) scholarship winners from four local high schools based on having the highest ACT scores at their respective schools.

From Charles Henderson High School, scoring the highest at the school and among the four schools, was Abbie Barron with a score of 33.