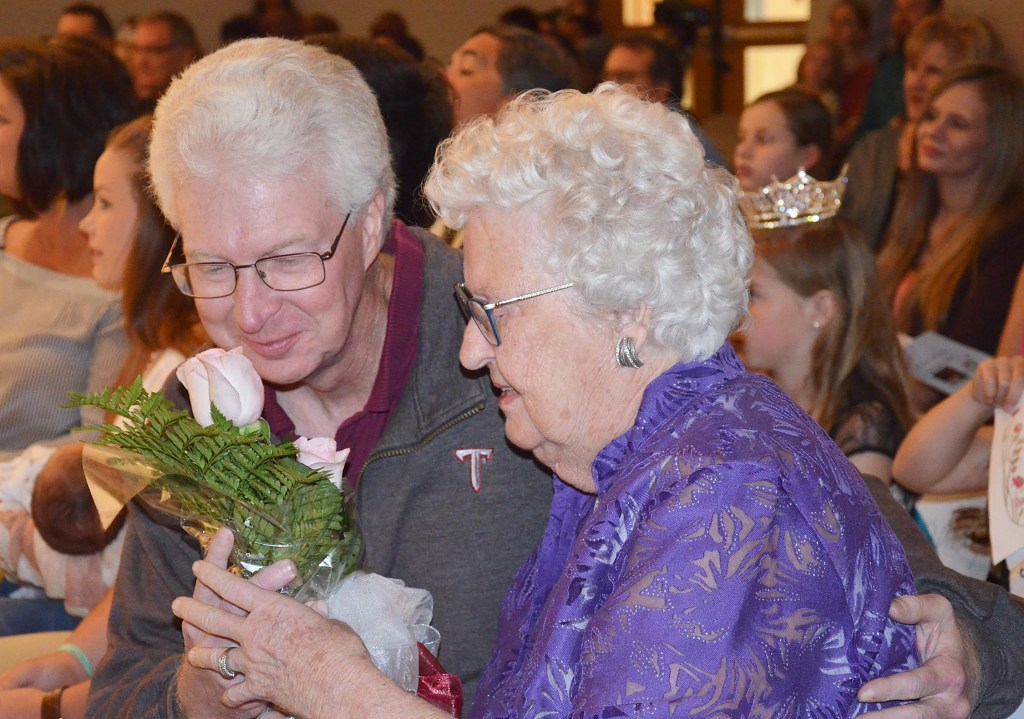 Juanita Holmes Bush was honored at the Miss and Little Miss Brundidge Pageant Saturday night as the first young woman to wear the crown of Miss Brundidge. She was crowned Miss Brundidge in 1947 while a student at the “schoolhouse on the hill.” The next year, the Brundidge school was moved to the present campus of Pike County High School. Mrs. Bush is pictured with her son, the Rev. Ellis Bush, Jr. at the pageant. Dr. Gayle Bush also accompanied her mother to the pageant.

“That was 70 years ago,” Bush said with a smile. “But I’m sure I was surprised and excited. I have a photograph from the newspaper of my friends, Dorothy Lee Helms (Laney) and Eva Nell Whittington (Steed), with me on that night. We were young girls back then.”

On Saturday night, Bush once again took center stage at her Alma Mater. She was introduced to the audience of the Miss and Little Miss Brundidge pageant at the Pike County High School Fine Arts Building as the first young woman to be honored as Miss Brundidge. The year was 1947. World War II had ended and she and her classmates at PCHS had high hopes for their futures.

“Times were very different,” Bush said. “Times were simple and girls didn’t have the opportunities they do now. The Miss Brundidge Pageant was one of the few things we could compete in because girls didn’t play sports. I was a cheerleader and got to cheer for the football team.”

Other than school and church activities, going to the picture show and to square dances were the special things for young people to do.

Then, a young man from Troy, Ellis Bush, came into her life.

“Back then, young men who wanted to become ministers were given opportunities to take the pulpit,” said Bush, who was in the congregation one Sunday when young Ellis Bush preached. Evidently, at some point during his sermon, his eyes fell upon a member of the congregation, Juanita Holmes.

“He asked me for a date and five weeks later we were engaged,” Bush, said with a smile. “Ellis was teased that the reason he was interested in me was because I could play the piano and sing. Those are good traits for a preacher’s wife.”

Together, they attended Howard College, both majoring in English. After graduation in 1951, he entered the ministry and she became a preacher’s wife, roles that suited each of them perfectly.

When the first Miss Brundidge was crowned in 1947, she had no idea where life would lead her, but with God leading the way, it has been a remarkable journey.

Bush applauded all participants in the Miss and Little Miss Brundidge pageant and congratulated the winners of each division.