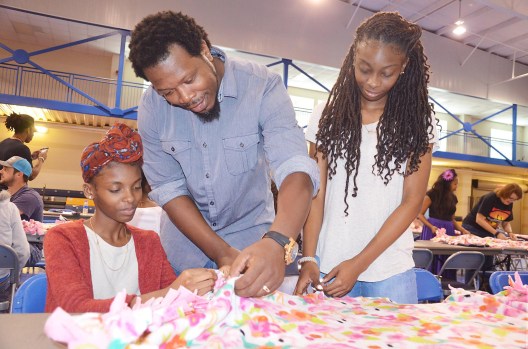 Tremaine McClain’s daughters, Rayvion, 16, and Nyasia, 17, were among the older daughters at the Cover Me Daddy event Saturday at the Troy Rec Center but they readily admitted having their dad in their lives is important. The father and daughters had fun, and a bit of trouble, tying the knots on the blankets that will be keepsakes for the daughters. 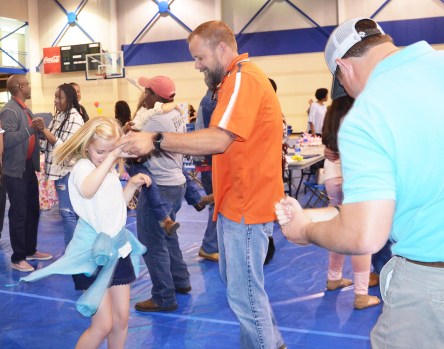 Aubree Parish danced circles around her dad, Jeff, at the “Cover Me, Daddy” father/daughter outing Saturday. Dad and daughter had a fun time making memories that will last a lifetime. 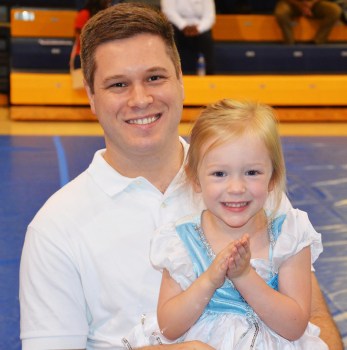 Foz Williams and his three-year-old daughter, Evelyn, had a Cinderella kind of day at the “Cover Me, Daddy” day at the Troy Recreation Center Saturday. Dads and daughters of all ages strengthened their relationships through different activities and shared entertainment.

Evelyn Williams chose the dress she wanted to wear on her Saturday morning date with her dad. She wanted to be dressed just like Cinderella.

To Foz Williams, his three-year-old daughter is a little princess any day of the week.

Foz and Evelyn were among the dads and daughters who participated in “Cover Me Daddy,” a “Daughters Lives Matter” event at the Troy Recreation Center Saturday.

“I’m here for, her,” Williams said, smiling at little Evelyn. “It’s an opportunity for us to do something special together. Something she will remember. It’s a chance for us to bond.”
Bonding is a word that is tossed around often. However, the importance of that one word can’t be minimized said Dr. Lee Hicks, superintendent of Troy City Schools,

Speaking directly to the dads, Hicks said, as the father of a daughter, he knows the importance of a father/daughter relationship, “it’s priceless.”

He encouraged the dads to be active participants in the lives of their daughters.

“There is no true replacement for an active father,” Hicks said. “What you are doing today is wonderful. You could be doing other things on a Saturday morning but you are spending time with your daughters. Time is precious. In the blink of an eye, your daughters will be out the door.”

“There’s no way to take a father’s place,” Smith said. “You can’t make up for that but you can strengthen the relationship that you have with her. That’s why I’m here.”

Larry and Meredith Holcomb were in attendance primarily because Meredith was a finalist in the poetry contest.

He was there to support her in the contest but he was enjoying the extra time they had together.

Meredith said she was glad the two of them had time together.

Walter Holly, laughingly, said he was at “Daughters Lives Matter” because it was too windy to go fishing.

But he quickly admitted that he realizes how important dads can be in the lives of their daughters. Spending quality time together is a good way to strengthen those relationships.

Troy Mayor Jason A. Reeves said the emphasis that is placed on families couldn’t be downplayed.

“Many of the issues that we face today could be solved in the family unit,” he said. “Many answers for today’s problems could be found in their parent/child relationships. I applaud each dad who took the time to share this time with his daughter. As dads, what you are doing today is extremely important.”
Reeves said parenting should not be left up to schools, churches, and government organizations.

“They can’t do it all and these are not the places to do it all,” he said. “Today was a great day for dads and their daughters. I thank all of those who made it possible.”

Tamara Williams, who spearheaded the event, said Daughters Lives Matter is a nationwide campaign to increase the number of healthy father and daughter relationships as it relates to three key principles: Education Attainment, Victimization Prevention and Poverty Avoidance.

“Cover Me Daddy was our theme for 2018,” Williams said. “We may have a different theme next year and we want people to remember the campaign.  We thank everyone who had a part in the success of our dads and daughters day, especially the dads who took the time to make it special for their daughters.”