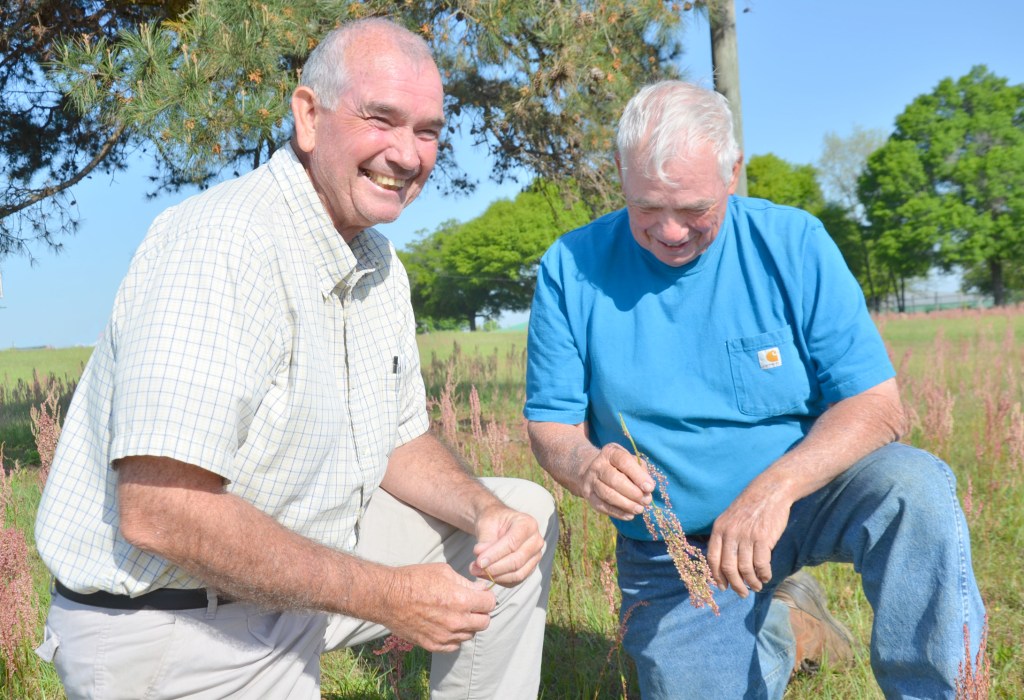 Perhaps the cause of it was the extremely cold weather this year. Maybe it was the lunar eclipse or the fires out West or maybe the Russians had something to with it. But, whatever the reason, the azaleas have been in magnificent bloom this spring and the countryside has been blanketed in the soft, rusty red of billy goat grass.

Those fortunate enough to have savored the sweet, bitter taste of the tall springtime weed need only to close their eyes and drift back to the good ol’ days of the 1940s, ’50s and early ’60s and remember lying in the grass and chewing billy goat grass while watching the clouds roll by.

Seeing a couple of grown men lying in a field chewing on billy goat grass would have been a little strange had those two men not been brothers, Don and Jimmy Renfroe. Both are country-kind of boys who love the outdoors and the old ways in which they grew up.

The rusty-red fields had such a strong magnetic pull on the brothers that they “took a chew” and recalled their boyhood days and their taste for billy goat grass.

“Growing up in rural Northern Pike County in the 1950s and ’60s, we didn’t have a lot of access to store-bought things,” Don, the older said. “So, we had to provide the best we could for ourselves. Baseball was a favorite outdoor activity for us but it took a lot of improvising to play the game. We played in the yard, in the pasture, ‘in’ the dirt road. We used anything we could find for the bases and I mean anything.”

A tree stump, a rock, a tin can, a rose bush, anything that could be found in and around the yard could be a base. But, the cows provided the bases for the baseball games played in the pasture.

“And, the pasture bases were better if they were dried out,” Don said, laughing. “The bats were wood and sometimes homemade, an ax handle would do. The ball was most always old and the cover had been knocked off so many times that we had to wrap it with black tape.”

Don said back in those days “all” ballplayers chewed tobacco. If there were exceptions, he didn’t know about any.

“All of us young’uns needed ‘bacca to be good ball players,” he said. “But our mamas and daddies didn’t let us chew real tobacco so what we did was chew billy goat grass.”

The brothers described the billy goat grass of their memories as wild, tall-stemmed weeds that, when chewed, were kind of tangy-sweet and good replacements for a “chaw of tobaccer.”

“One of our daddy’s best friends, Mister JW Green, was the coach,” Don said. “Mister JW was known to have a little devilment about him. Jimmy, being a little chubby and different, if you will, became sort of Mister JW’s pet or ‘assistant coach.’”

One day at practice, Jimmy was following Coach JW around and became big-eyed when the coach took out a “chaw” and gave him, the assistant coach, a few leaves.

“I can’t have no bacca,” little Jimmy said.

The little fellow took the “chaw” offered to him and went to chewing.

“When we got home, Jimmy was a little woozy,” Don said. “Mama started asking him what was wrong. I guess, in order to doctor him, she asked Jimmy if he had eaten anything.”

The little assistant coach said he hadn’t eaten anything. “Just chewed me some billy goat grass Coach JW gave me.”

Knowing JW Green, the boys’ daddy “got into the diagnosis.”

“Daddy found a tobacco leaf in Jimmy’s pocket and asked him what it was,” Don said. “Jimmy said it was billy goat grass that had been cured. “That’s what Coach JW said.”

Don said he was sure that his little brother was going to get “the whoopin’ of his life.”

“But he had turned from yellow to green,” Don said.

Instead of a giving little Jimmy a good whipping, his mama pulled him up on her lap.

“Mama said she didn’t know about Mister JW but Jimmy was already ‘cured,” Don said, laughing. “Now, in my old age, when I’m walking across the pasture and come across billy goat grass, I’ll take me a chew. As I stand there, chewing, I can hear Jimmy ‘regurgitating’ and my daddy scolding him. And, then I can hear that signature chuckling laugh of Mister JW Green.”

When Don and Jimmy Renfroe were growing up, all stories, read or told, had a moral.

Jimmy said the moral to his brother’s story is “don’t chew billy goat grass that has been cured.”