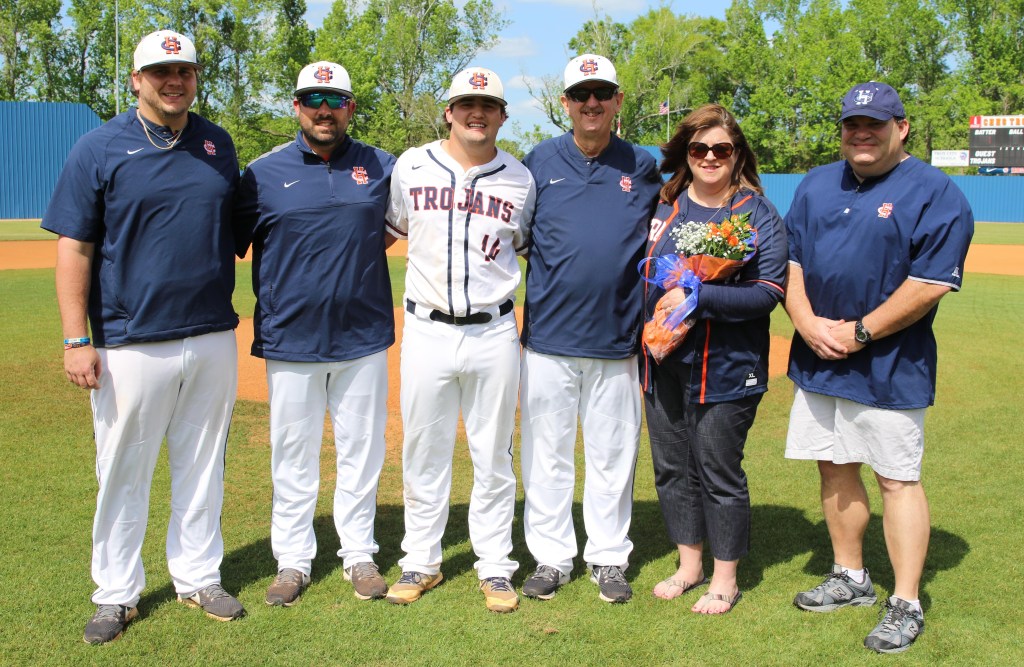 Will Reeves ripped a base hit over the third base bag with the bases loaded and one out in the bottom of the seventh, giving Charles Henderson High a 5-4 win over Opp High, and earning Noah Lowery the win on the mound on Senior Night.

After the come-from-behind win for the Trojans, Head Coach Matt Whitton met with his team in left field, and later shared how proud he was of their fight.

“I thought our guys competed their guts out,” said Whitton, who took over the reigns of head coach mid-way of the season. “I just told them I was really proud of them for seven innings, for competing. We got ahead early, let them back in it and they took the lead, but we never quit. That’s what good ball clubs are going to do. I think that if we play like that, we have a good chance to beat anybody that comes in here.”

Opp led 4-3 entering the bottom of the sixth, but the Trojans scored one in that frame and Reeves sent a rocket down the left field line to score Chris Maxwell, who was a courtesy runner for Lowery, giving CHHS the 5-4 win.

CHHS took a 2-0 lead in the bottom of the first when Tyrell Jones reached on an infield error, Lawson Scarbrough hit a double to left, Keonte Brantley singled, Reeves was hit by a pitch, and Walker Stallworth drew a bases-loaded walk for the 2-0 lead.

Opp tied the score 2-2 in the third inning, added a single run in the fourth and another in the top of the fifth for a 4-2 lead over the Trojans.

The Trojans tacked on one run in the fifth when Lowery and Scarbrough each singled, and Maxwell, again running for Lowery, later scored.

CHHS tied the score 4-4 in the bottom of the sixth inning as J.B. Sanders singled, Chance Pollard followed with a base hit, and Sanders scored from third when Pollard got in a run-down between first and second base.

With one out in the bottom of the seventh inning, Lowery doubled to left-center, Scarbrough walked, Brantley walked to load the bases, and Reeves sent the ball into left field for the 5-4 win as the team emptied the dugout and mobbed Reeves between first and second.

Scarbrough and Sanders each had three hits each for the Trojans, Lowery had two hits, while Pollard, Brantley and Reeves had one hit apiece.

Lowery pitched a seven-inning complete game, allowing four runs on six hits, striking out four, and getting out of more than one jam when Opp would threaten.

The Trojans began the season in an uncharacteristic slump, losing their first nine games before Whitton took over and CHHS earned their first win. Now 11-10 under Whitton and 11-19 on the season, CHHS has won three of their last four games.

Lowery was especially proud his team won on the last regular season game he dressed out as a senior, and he is thankful of the leadership of Coach Whitton.

“It’s good to go out on top, especially with the season we’ve had so far, and it’s a credit to all my teammates, and Coach Whitton,” said Lowery. “Coach Whitton turned us completely around, and my hat is off to him. It was a great win for us, especially going into the playoffs.”

The Trojans were scheduled to play two games Saturday at Jemison, but those games were canceled due to weather concerns. On Tuesday CHHS will travel to and Providence Christian for one seven-inning game to conclude the regular season.

CHHS will then host the first round of the Class 5A state playoffs Friday against either Faith Academy or St. Paul.