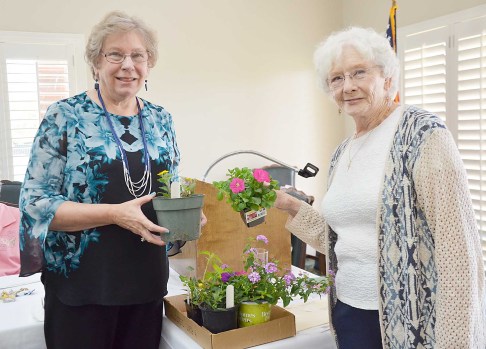 Judy Griswold, president of the Alabama Master Gardeners Association, right, was a guest speaker at the April meeting of the Oliver Wiley Chapter of the Alabama Society Daughters of the American Revolution. She had pollinator plants for each member of the association. She is picture with Mae Beth Gibson, association president. 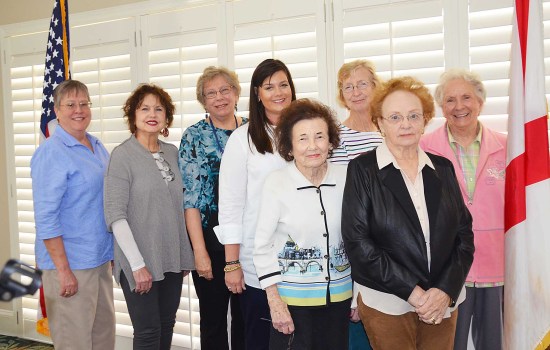 Stephanie Baker, center, was also a featured speaker at the Wednesday meeting of the DAR meeting. Baker is a Troy City Council member and also chair of Reunion Troy.

The Oliver Wiley Chapter of the Alabama Society Daughters of the American Revolution welcomed two guests to the April meeting on Wednesday.

Judy Griswold, Pike County Master Gardeners president, and Stephanie Baker, Troy City Council member and chair of the Troy Reunion committee, were the program guests. Griswold spoke to the DAR members on pollinator gardens and Baker informed them of the city’s participation in the Alabama Bicentennial Celebration.
“With the use of so many insecticides and pesticides, the number of pollinators has greatly declined,” Griswold said. “Bees are thought to be necessary for the fertilization of 75 percent of the fruits and vegetables in the United States.”

The DAR members were made aware of the Million Pollinator Garden Challenge that is an effort to encourage members to plant pollinator gardens.

Griswold said the gardens might be as small as potted plants on a patio or balcony or the corner of the yard. Or they may be a community garden plot or cover several acres. However, the gardens must include plants that provide nectar or pollen or serve as host plants for butterfly caterpillars.

Griswold gifted each DAR chapter member with a starter pollinator plant for her pollinator garden.
Baker told the club members that the city’s Reunion Troy committee hosted John Lewis Day in February as an event of the Alabama Tourism Department’s three-year Bicentennial Celebration – places in 2017, people in 2018 and stories in 2019.

“In 2017, we celebrated Alabama’s places,” she said. “This year, we are celebrating Alabama’s people and Georgia Congressman John Lewis of Troy was a leader in the Civil Rights Movement. We wanted to recognize and honor him.”
Baker said November 2018 is the 100th year celebration of the signing of the armistice between the Allies and Germany that called for a ceasefire in World War I.

“The Troy Reunion Committee is planning a special time of recognition of our veterans during the month of November,” she said. “We want to elevate appreciation for our veterans throughout the month.”
Baker said, although the committee is taking a lead in the local Alabama Bicentennial celebration, hopes are that churches, communities, schools, club, organizations and families will have celebrations of the people, places and stories that have threaded the character of their groups over the 200 years of Alabama’s statehood.