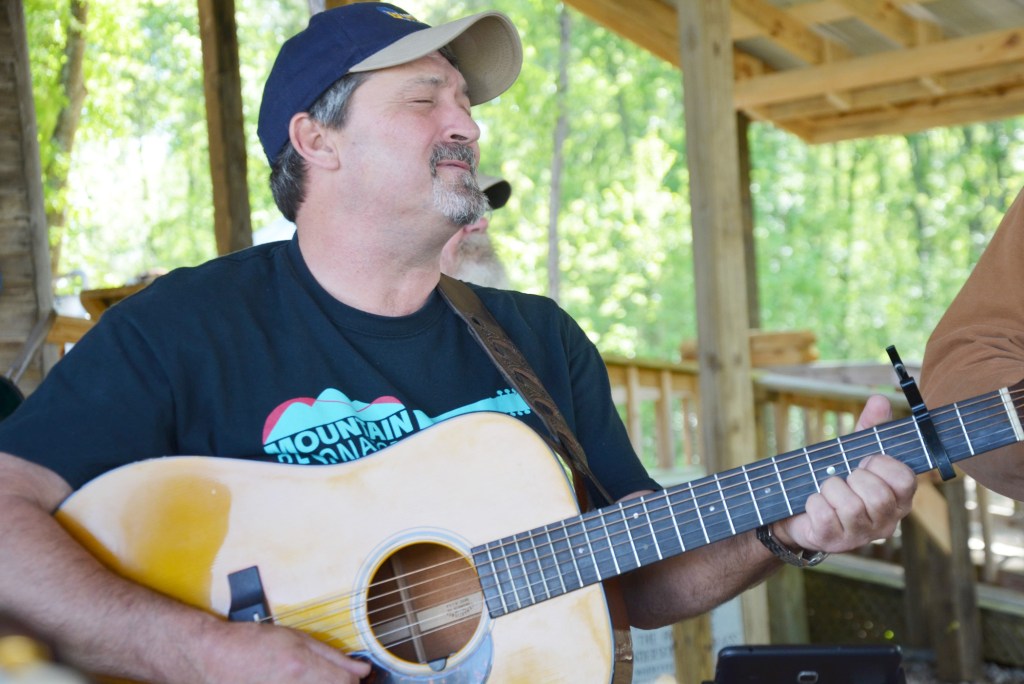 Around Henderson in rural Pike County, dedication is accompanied by the high lonesome sound of bluegrass music.

On Wednesday afternoon, a band of pickers gathered in a pole barn that retained the familiar smell of fresh-cut lumber.

Frank Livingston of Pine Level donated the logs for the building of a pole barn at Rex Locklar’s Bluegrass Music Park in Henderson. He cut the logs into 2x6s and hauled them to the park. Livingston, Pete Austin, Shelby Carghile and Bobby Jackson sawed the lumber and constructed a pole barn so the Rex Locklar Memorial Bluegrass Festivals could be held rain or shine.

“Years ago, there was a stage inside the old Henderson Schoolhouse so we didn’t have to worry about rain,” Carghile said. “When the roof collapsed, we just had to hope the rain stayed away. When it didn’t, the picking and singing was done under the trees and under RV canopies. We needed a place where people could get out of the elements and enjoy the music and fellowship that comes with bluegrass music.”

The Rex Locklar Memorial Bluegrass Festival is unofficially underway and has been since last weekend when RVs and campers started to roll in.

“By Friday, we’ll have about 90 RVs and campers,” Austin said. “People have been picking and singing since the weekend but Friday night is when we really kickoff the festival.”

The festival will officially begin at 5 p.m. on Friday with everything toning down around 9 p.m. and around the same times on Saturday.

A special event is planned for 1 p.m. on Saturday. Members of the Alabama Bluegrass Music Association will be at the park to make another presentation of the Hall of Fame award Locklar received posthumously in Birmingham in March.”

Austin said the association wanted Rex’s many friends to have an opportunity to share in the award.

Everyone is invited to come to the Bluegrass Capitol of Pike County this weekend in Henderson.

“Bring your instrument and pick or come and sing along or just come and listen,” Austin said. “We’ll have concessions available so come and stay awhile. We’ll be glad to have you.”