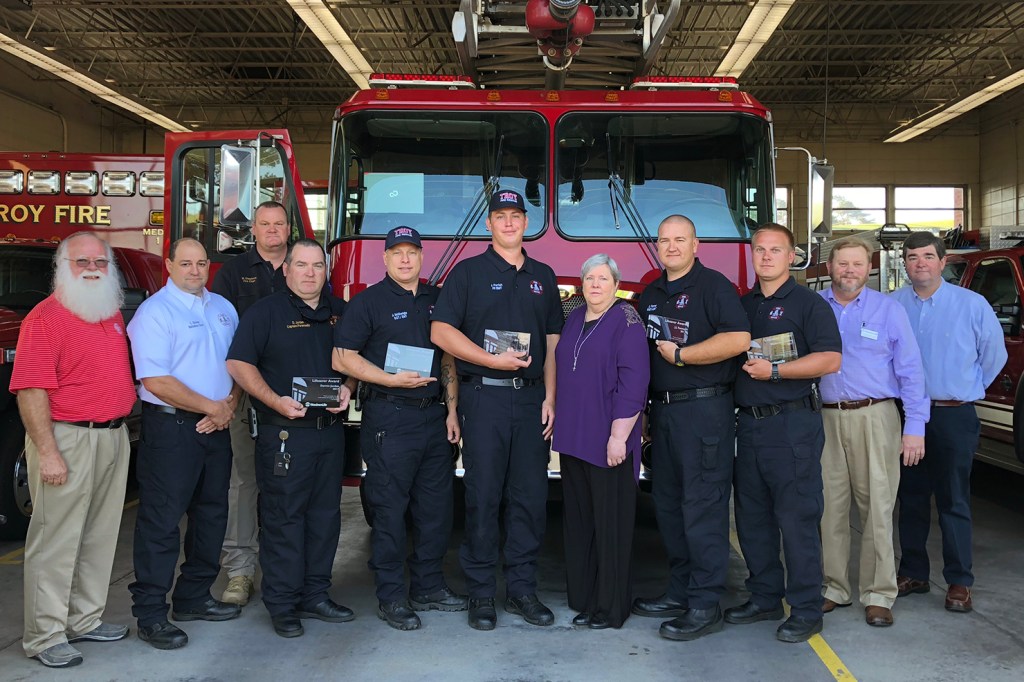 On Aug. 17, 2017, Ovida Walden lay in the parking lot of Troy Health and Rehab suffering from cardiac arrest. On Wednesday, Walden joined members of Woodmen Life in honoring the Troy firefighters that saw her in need of care and rescued her that fateful day.

“Woodmen Life is a big believer in members participating in community activites and giving back, and one of our ways of doing that is presenting awards to these firemen and policemen, or anybody who saves somebody’s life,” said Jimmy Messick, president of the life insurance company’s local chapter.

The six firefighters – Darren Jordan, Jason McManigle, Joe Parrish, J.J. Farmer, Blake Hermeling, and Charles Daniel Hussey – happened to be driving back past the rehab center on their way back from lunch and sprang into action.

“By the time somebody had called and the dispatchers had time to send out the call, they were already on the scene,” Messick said.

This isn’t the first time these officers have been rewarded and thanked for their service on that day, and it probably won’t be the last.

Walden met with officers in October 2017 to thank them for what they did for her and was back at Fire Station 3 Wednesday to thank them again.

“It means a lot to these men and the department as a whole,” said Curtiss Shaver, battalion chief. “When they have a rescue like that, most of the time they just go on about their lives and don’t often have any interaction with the patient again. It’s good to see the after effects of the patient living their lives. It puts an emphasis on their job and how important it is.”